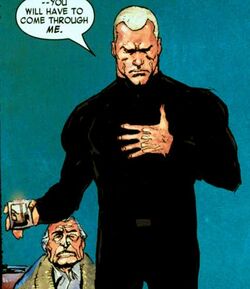 Vasily was hired by Gynacon to kill all of the former Black Widows in order to protect the patent of an anti-aging formula they'd bought from the Red Room. He wore a special perfume with pheromones that prevented Black Widows from attacking him, but when he broke Natasha Romanova's nose, the perfume no longer affected her, and she killed him.[1]

Like this? Let us know!
Retrieved from "https://marvel.fandom.com/wiki/Vassily_Ilyich_Ulyanov_(Earth-616)?oldid=4665849"
Community content is available under CC-BY-SA unless otherwise noted.