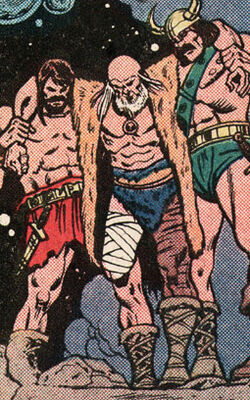 Together with his brothers Vili and Odin, Ve led the early Asgardians in a war against the Frost Giants of Niffleheim and built Asgard, the capital city of the Asgardian realm. Ve and his brothers then went to Muspelheim where they learned that Surtur intended to use his giant flame sword to ignite the Eternal Flame of Destruction, thereby destroying the Nine Worlds. In order to stop this the brothers magically merged into a giant the size of Surtur and in this form succeeded in shattering Surtur's sword. Returning to their individual forms the brothers carried off the brazier holding the Eternal Flame of Destruction. Surtur and his hordes pursued them to the interdimensional nexus between Asgard and Muspelheim. Odin rode through the nexus carrying the brazier, but Ve and Vili remained behind to stop Surtur, telling Odin to rule wisely. Upon their destruction Ve and Vili's powers transferred to Odin and the Odinforce was created.[3]

Like this? Let us know!
Retrieved from "https://marvel.fandom.com/wiki/Ve_Borson_(Earth-616)?oldid=5276358"
Community content is available under CC-BY-SA unless otherwise noted.