Marvel Database
Register
Don't have an account?
Sign In
Advertisement
in: Items, Anthony Stark (Earth-616)/Items, Diseases and Viruses,
and 7 more

The Venom Virus was created by Kristoff Vernard using a sample of the Venom symbiote taken using time-travel from its time in captivity by the Fantastic Four. Kristoff later sold it to Victor von Doom through proxies and arranged its deployment on American soil, knowing it would be traced back to Doom, who would consequently be arrested and incarcerated.[3]

Stored in a satellite, the Venom Virus was "accidentally" deployed over Manhattan and infected both various superhuman individuals and thousands of regular civilians and animals. Iron Man was eventually able to synthesize an antidote for the Venom Virus, stopping its spread and curing those who were infected.[4][5]

The Venom Virus covers its infected host in biomass that functions similarly to a normal symbiote, granting them an elongated jaw, fangs, claws and prehensile tongue; and making them highly aggressive and animalistic in behavior.[4][5]

Unlike normal symbiotes,[6] the Venom Virus possesses the following limitations in its infection: 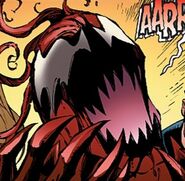 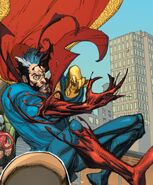 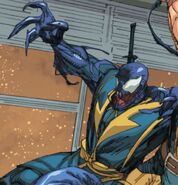 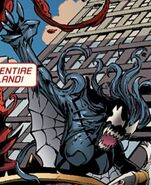