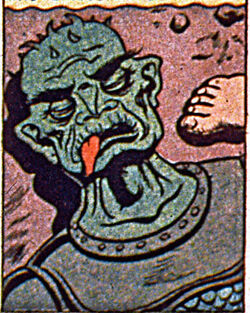 While in some realities in the multiverse have developed where there is life on the planet Venus, in the Earth-616 dimension there is a great question as to if there has been life on Venus. There have been many beings who have claimed to come from Venus, and given the variety of these beings, their claims are called into question. It is also known that many other races in the universe would use staging planets in the Sol system as staging grounds for attempted invasions of the planet Earth, often claiming to have come from that planet in order to confuse the origin point of the invasion.

Below are a listing of beings that one time or another claimed or thought to have originated from the planet Mars.

A humanoid race claimed calling themselves Venusians claim to live on the planet Venus, a seemingly peaceful race but not without its own criminals which are incarcerated for their crimes. Sometime in the year 1925, American mobster George Mulford used a stolen rocket to escape to the planet Venus. There he was welcomed by the Venusians and he taught them how to speak English. Wishing to use Venusian technology to gain untold wealth on Earth, Mulford freed a number of criminals and kidnapped a Venusian female named Vanza and brought them to Earth in the year 1945.

There, Mulford led his followers in attacking the island nation of Barbuda in order to steal its wealth. Mulford and his minions clashed with the Sub-Mariner, who with the help of Vanza tracked down their secret headquarters. Namor slew Mulford and then triggered bombs that blew up his hideout, killing all the renegade Venusians inside.[1]

Another race, this one a race of sentient robots, also claimed to be from the planet Venus. Initially considering the human race an inferior species they sought to conquer the planet Earth. They arrived in late 1953, creating a hideout in the waters of the South Pacific. They used a magnetic beam to sink supply ships and use them for salvage as part of their invasion plot. Their activities prompted the Sub-Mariner to come out of retirement to investigate. He easily trounced these Venusians as they did not anticipate encountering a human being with his strength and ability to breath under water.

The Venusian leader then surrendered and ordered his minions to return to their home world never to endanger the Earth again. However, the Sub-Mariner kept the Venusian leader captive to prove to the authorities his existence, however after the invasion force fled Earth in a rocket their captured leader instantly went inert. His body was turned over to the United States government for examination.[2]

Not much is known about the Venusians that exist on Earth-5391. In the year 2075, the Venusians are part of the United Planets, a coalition of four planets in Earth's solar system that are devoted to galactic peace.[3]

The humanoid Venusians were more advanced than 1940s Earth. They had weapons that could either burn or melt human flesh, bombs that exploded silently, and energy whips that could coil around their victims. Despite these advances, the Venusians did not appear to have any space travel capabilities.

The mechanical Venusians had rocket technology and had magnetic based weaponry that fired beams of magnetic energy.

Of the humanoid Venusians, Vanza is the only documented female of the species, however she makes no claims specifically that she is a member of the Venusian race. While speculative at best, Vanza is very similar to Queen Jarna of the Lavorites, another species of alien that claims to live on Venus. As Jarna and Vanza do not have common traits to either species it is possible that they are actually members of a third, as-yet unnamed race.

Retrieved from "https://marvel.fandom.com/wiki/Venusians?oldid=4666866"
Community content is available under CC-BY-SA unless otherwise noted.