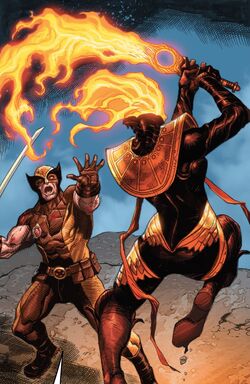 A blade of flame, innocents interred; all is fair in love and her.

Vermilion the Red Sword of War was the blade wielded by the First Horsemen War.[1]

During the attack of the First Horsemen of Apocalypse on the Starlight Citadel, Saturnyne intervened and set a contest where the forces of Krakoa and Arakko would each have ten swordbearers fighting in Otherworld.[1] War armed with her Red Sword Vermilion was one of the Arakkii chosen as one of the Swordbearers of Arakko.[1][2]

Like this? Let us know!
Retrieved from "https://marvel.fandom.com/wiki/Vermilion?oldid=6430722"
Community content is available under CC-BY-SA unless otherwise noted.