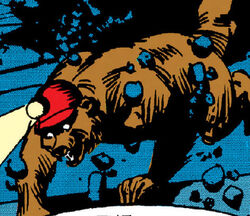 Vernon French is the Crimson Daffodil, a violence-despising gentleman thief. During a bank heist, he took Tandy Bowen hostage, while using his powers to make the bank manager bend to his will and clean out the vault.

French was faced with the difficult task of keeping his violent henchmen in check. He preferred to use his powers, not force, to carry out his crimes. This particular heist is interrupted not only be Cloak and Dagger and his own henchmen but also by the arrival of Cloak and Dagger's foes, Ecstacy and the Disciplinarian. In the ensuing brawl, the Daffodil is knocked out by a stray light dagger. Upon awakening, he tells Dagger that he is going straight, and exits dramatically through the skylight.

Returning later, French had manifested a secondary mutation and taken on a new identity as The Wombat. He attempts to help the pair against the Marked Man, but is quickly defeated.

It is unknown what effect had the M-Day on him.

After the Civil War, he was listed as a potential recruit for the Initiative by Tony Stark.[1]

As Crimson Daffodil, French had the power to re-route signals from the pain center of the brain to the pleasure center, making people very docile. Later, he developed a secondary mutation that gave him superhuman digging skills. With these powers, he took on a new identity as the Wombat.

Like this? Let us know!
Retrieved from "https://marvel.fandom.com/wiki/Vernon_French_(Earth-616)?oldid=6105716"
Community content is available under CC-BY-SA unless otherwise noted.