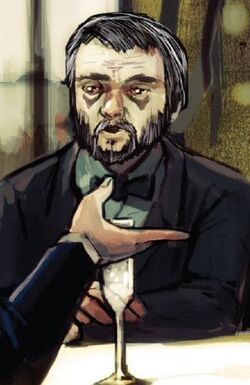 I have been working on a gamma-ray beam to pierce space and detect signals from other planets! If there is life out there in the galaxy perhaps through my beam, we can make contact!

Vernon van Dyne was a scientist and father to Janet Van Dyne. He owned his own laboratory, and had no known assistants. Vernon was working on a gamma-ray beam in order to detect signals from other planets. He wanted to find out whether extraterrestrial life existed in the Milky Way, and hoped to make contact with aliens. [1]

Vernon run into problems with his experiment, because the beam needed strenthening to achieve its goal. He wanted to recruit another scientist to help resolving this problem, and he chose the then-famous Henry Pym for that purpose. [1]

Vernon visited Pym's laboratory unannounced and uninvited, bringing Janet with him. After introducing himself, Vernon explained the reasons for his visit and tried to recruit Pym. Pym informed Vernon that his field of studies was cell biology, not physics. He had no interest in working outside his area of expertise. Noticing Pym's lack of interest, Vernon soon left. He failed to notice that Pym was more interested in Janet, rathern than listening to his theories on alien contact. [1]

Later, Vernon was working alone in his lab, and made an apparent break-through with his experiment. When Janet informed him that she was heading out to have some fun, Vernon did not even bother to reply. He was pleased that his rays were going beyond the Milky Way and into other galaxies, even into areas uncharted by human astronomers. He was surprised when his machines indicated that some unknown form was following down the path of the rays, approaching from the opposite direction. [1]

Vernon had accidentally opened a portal to a prison dimension, where the alien criminal Pilai had been exiled. The portal allowed Pilai to teleport to Earth, right inside Vernon's laboratory. Pilai thought that he was safe on planet Earth, but felt that he should take care of loose ends. He destroyed Vernon's gamma-radiation device to ensure that nobody could track him down to Earth. Then killed Vernon himself, to prevent him from informing anyone of his presence. [1]

When Janet returned to her father's laboratory, she discovered Vernon's corpse. She decided to contact Henry Pym, to request help. Later, Janet took a vow to avenge her beloved father. [1]

Like this? Let us know!
Retrieved from "https://marvel.fandom.com/wiki/Vernon_Van_Dyne_(Earth-616)?oldid=6490767"
Community content is available under CC-BY-SA unless otherwise noted.