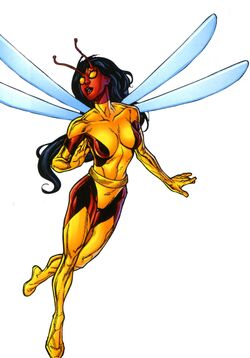 Dragonfly was the only female member of Count Nefaria's Ani-Men who clashed with the X-Men at NORAD in Cheyenne Mountain.[1] After she was defeated, she was imprisoned at Muir Island, but managed to escape.[2]

She was later a member of the army of super-powered women known as the Femizons who clashed with Captain America and Paladin.

Veronica was kidnapped and further mutated by the Stranger She was captured by the enigmatic alien, the Stranger, and was imprisoned in Stranger's Labworld for the alien to study her. She remained there until freed by Overmind. Eventually returning to Earth alongside several of her other specimens following a rescue by Quasar.[3]

She worked with the reality-displaced Squadron Supreme and occasionally assumed the appearance of a giant dragonfly who could control insects. In this state, she was left mindless and manipulated into doing her sister's bidding.[4]

Later still, Dragonfly was a member of the incarnation of the Masters of Evil led by the female Crimson Cowl who clashed with the Thunderbolts.[5]

Dragonfly was briefly recruited into Baron Zemo's Army of Evil.[6]

Dragonfly was among several animal-themed super-villains captured by Taskmaster and Black Ant to serve as hunting targets in Central Park for a host of wealthy participants controlling robotic drones, part of a plot concocted by Kraven the Hunter and Arcade.[7]

Due to her unstable genetic makeup, her body absorbs radiation and uses it to further mutate her into a 12' long insect form with the power to control every insect within a 200' radius. Excess radiation is slowly released (this is expedited in immersion in water), reversing any radiation-induced mutations. Consultant's armor made her bulletproof.

Flight under her own power. Vehicles of any team she is working with.

Like this? Let us know!
Retrieved from "https://marvel.fandom.com/wiki/Veronica_Dultry_(Earth-616)?oldid=6485843"
Community content is available under CC-BY-SA unless otherwise noted.