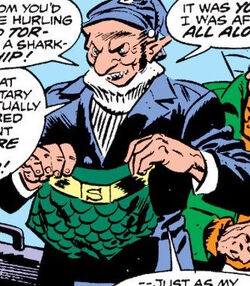 Verill Shark was a notorious pirate during the 1940s. In 1942 he aligned himself with the Nazis during World War II and joined Agent Axis and the Hyena on a mission to destroy Invader members Captain America, Sub-Mariner and Human Torch and collect trophies from each. The Shark targeted the Sub-Mariner and with his crew incapacitated the hero and stole his swim trunks which he mockingly used as a flag for his vessel. Before he could eliminate Namor, the hero was plucked from time by the Grandmaster along with Cap and the Torch to battle the time displaced Avengers. Following the end of the battle, the Sub-Mariner was returned to his proper place in time and easily defeated the Shark and reclaimed his trunks[1].

Avoiding capture during the war and resuming his pirate activities, the Shark resurfaced again in 1947. This time he targeted "Deep Sea Dan" Barrow's salvage operation of the Marta Carta, a Spanish vessel that sank carrying a cargo of gold bullion. To this end, he sent his men to kidnap Dan's daughter Shiela, but the kidnapping was botched when the Sub-Mariner rescued the girl and brought him back to his private yacht. However, after Namor left to keep an eye on the salvage operation, the Shark's men recaptured Shiela but were unknowingly followed by Namor's reporter friend Betty Dean. The Shark then sent a decoy ship loaded with explosives to go off near Dan's ship, killing the divers below salvaging the gold and incapacitating the ship. Namor ultimately stopped the Shark's divers from stealing the gold and easily bested the Shark in battle. However, one of the Shark's men attempted to kill Namor and his allies with explosives, but succeeded only in destroying the ship and sending them all unharmed into the water. The Shark was recovered and turned over to the authorities[2].

His subsequent fate is unknown.

Ironically, it appears that the Shark could not swim.

The Shark carried a pistol and had access to explosives.

Full name revealed in the Official Handbook of the Marvel Universe Hardcover Vol. 5

Like this? Let us know!
Retrieved from "https://marvel.fandom.com/wiki/Verrill_Shark_(Earth-616)?oldid=5253665"
Community content is available under CC-BY-SA unless otherwise noted.