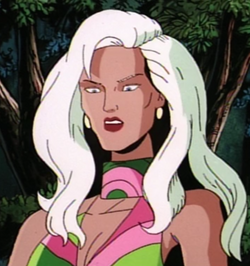 Vertigo was one of the followers of Mister Sinister and a member of the Nasty Boys. Her powers were amplified after Mr. Sinister genetically modified her with Magneto's DNA in the Savage Land.[1]

When the Multiverse was destroyed in the last incursion between Earth-616 and Earth-1610, Doctor Doom, with Beyonder's powers, recreated it in the form of Battleworld. Earth-92131 was recreated in the Westchester domain, ruled by Baron Kelly.[2]

The Shadow King realized that in comparison to those other domains, Westchester was a fragile paradise, and set out to ensure its survival by any means. Using the cloned body of Professor X, the Shadow King became Cassandra Nova, and used his new identity to become a politician and establish the Bureau of Super-Powers.[3]

At the Clear Mountain, Cassandra Nova used a form of psychotherapy called the "Mind Field" to brainwash those mutants who arrived to the institute and force them to live in harmony, Vertigo was one of the brainwashed.[4]

Seemingly those of the Vertigo of Earth-616.

Like this? Let us know!
Retrieved from "https://marvel.fandom.com/wiki/Vertigo_(Savage_Land_Mutate)_(Earth-92131)?oldid=5859813"
Community content is available under CC-BY-SA unless otherwise noted.