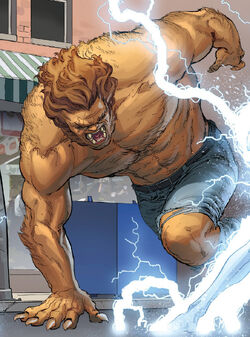 Sabretooth was a mutant who believed that men were crueler than less evolved animals, mutants should naturally be crueler and more monstrous than men. Little is known about his early life other than that he tortured animals as a child before moving on to people.[1] He was recruited into Weapon X, a black ops section of S.H.I.E.L.D. Initially coerced into serving them (he once spent six months as a NASA crash test dummy for disobeying orders), he eventually took a sadistic liking to the work, gaining a degree of authority over his fellow captive mutants. Sabretooth instantly disliked the similarly powered Wolverine, and made unverified claims that he slew Wolverine's wife and child.[2]

When Wolverine escaped Weapon X, Sabretooth was sent to bring him back; they clashed with one another in the New York subway and in Times Square before Wolverine escaped, thanks to Spider-Man's help.[3]

After Wolverine joined the X-Men, Weapon X located their mansion base and attacked it, capturing all of them except the absent Wolverine. Weeks later, Wolverine was recaptured in St. Petersburg. Sabretooth, now enhanced with adamantium implants similar to but more extensive than Wolverine's, took Wolverine outside the base to torment him by destroying files detailing the amnesiac Wolverine's past in front of him, unaware that his rival had allowed himself to be captured so that Weapon X's location could be uncovered. A Tracker implant within Wolverine led the Brotherhood of Mutants to the area to free the X-Men. Wolverine tricked an enraged Sabretooth into cutting his bonds, and the two battled until Wolverine castrated his foe and tackled him off a cliff. Wolverine recovered consciousness first, doing unspecified, but non-lethal damage to his downed foe.[2]

After Sabretooth recovered, he joined the terrorist Brotherhood of Mutant Supremacy. Though he briefly quit in disgust over Quicksilver's weak leadership, he returned when Magneto resumed control, soon becoming his right hand man. He led raids on the Louvre and other museums and galleries, gathering art prior to Magneto's plan to devastate the Earth. He also oversaw missions recruiting oppressed mutants from around the globe. When the X-Men attacked the Brotherhood's Citadel, Sabretooth again clashed with Wolverine, boasting he was bigger, stronger and could heal any wound Wolverine inflicted; in response, Wolverine decapitated him.[4]

He later confronted Storm and Logan outside the pool hall, 'Nowhere Special', sporting a new scar around his neck. He survived Wolverine's attempt to kill him through decapitation because his head wasn't severed completely which allowed him to recover. He claimed that his false memories from Weapon X had faded and he 'remembered' that Wolverine was his biological father. He demanded Wolverine help him find his mother but this was a distractionary tactic to allow him to steal a tissue sample from Wolverine so that Dr. Abraham Cornelius could attempt to clone him.[5]

Working on information provided by Bishop, Wolverine and the X-Men attacked Dr. Cornelius' lab and killed him, Creed continued to taunt Wolverine with claims of being his son which Wolverine did not believe as they didn't share a scent. After Dr. Cornelius was killed Creed escaped the lab before the X-Men could take him down.[6] Creed would later attack Tony Stark's mansion where the Ultimates were based, alongside the rest of the Brotherhood, facing off against Captain America before Quicksilver helped them to escape.[7] When the Ultimates followed them to the Savage Land, Creed fought with Hawkeye before being taken down by Ka-Zar's Sabretooths and then shot by Hawkeye when he had healed.[8]

Days after the Ultimatum wave hit, Sabretooth and fellow Brotherhood of mutant supremacy member, Juggernaut, were enjoying themselves at a strip club. Rogue entered the club, and captured Sabretooth and Juggernaut to make them tell them where Magneto is. Rogue put Sabretooth in a room, where she absorbed his abilities and gutted him with claws. Rogue entered Sabretooth's mind, since Sabretooth wouldn't talk, and found a horrible pack of memories of death, blood, and fighting. Unable to discover anything, Rogue left to see what happened to Juggernaut. Rogue later changed her mind, and made a team combining herself, the reformed Vindicator (John Wraith), Juggernaut, and Sabretooth, and set off to help the mutants that were being slaughtered at the Xavier institute. When entering, the team quickly and easily fended off against the racist and traumatized people who lost their loved ones in the wave. Sabretooth attacked William Stryker, the leader of the group, but Stryker blasted Sabretooth away and into another room. Sabretooth sat on the ground with his right arm severely injured. A group of Madrox duplicates found him and told him to either come with him to Magneto or to die with the rest of the mutants, Sabretooth judged the battle at the Xavier school a losing battle and chose to go with Madrox.[9]

Returning to Magneto in the arctic circle, the mutants waited as the heroes came for them. Angel crashed threw the window into Magneto's room. Magneto gave Sabretooth the nod, and Sabretooth entered, slashing Angel's back, using his teeth to rip out one of Angel's wings, and stomping on Angels neck to kill him. Hawkeye entered the room, shooting Sabretooth in the eye.[10] Mystique set off a charge in the boiler room of the levitating citadel, letting the citadel drop into the freezing waters. Sabretooth came in and saved Mystique, escaping with her on a glider. Later, Sabretooth was present when Quicksilver, once believed dead, celebrated assassinating Scott Summers by pushing the bullet used to kill his sister, the Scarlet Witch, through Cyclops' brain.[11]

Sabretooth, Mystique, and the robot Assemble came to the old Xavier school claiming that they had come to form a new team. However, Jean Grey blamed them for the destruction and a fight ensued. Captain America then arrived, decapitating Assemble to end the fight stating that he also came to pay respect to the fallen X-Men, though not before Kitty Pryde stabbed Sabretooth with the claws of Wolverines skeletal arm remains.[12]

Trying to make himself look more human, Victor cut his hair and wore a black leather dust-jacket and sunglasses, to avoid getting apprehended by the government since he chose not to turn himself in for being a mutant. He, along with Mystique, sought out Jean Grey (now calling herself Karen Grant), in an attempt to conscript her to their, as of yet unknown, cause. Jean used her powers to hurl him into the front of a bus, and crushed him with an additional two vehicles that exploded into a giant fireball upon impact. His last words before the explosion were "He's not gonna be happy when he hears about this..."[13]

Sabretooth later attacked Wolverine's son Jimmy, almost killing him before being stopped by Quicksilver. He was found in a strip club by the Hulk who severely beat him in revenge at the request of Karen Grant who was helping him control himself. He was again rescued by Quicksilver and his newly created Brotherhood, including Mystique and Teddy (the son of Blob). Sabretooth recuperated and continued working for Quicksilver who believed the government were trying to cure mutants.[14]

Victor later reappeared in a more feral form, that resembled a real Saber-toothed cat. He fought against Electro, over matters related to Norman Osborn's money. However he and Electro were easily defeated by the new Spider-Man, with the help of Cloak and Dagger, he was then left webbed on the street for the police to apprehend.[15]

Sabretooth possesses various superhuman abilities as a result of genetic mutation and artificial augmentation and are nearly identical to those possessed by Wolverine.
His mutation grants him bestial qualities which cause him to resemble a feral animal at times. His abilities include:

Sabretooth is an excellent hand to hand combatant, having received training in martial arts over the course of his extended lifespan. He has proven himself to be a capable field leader and an expert tracker, even without using his senses.

Sabretooth is sufficiently strong to lift in excess of 800 lbs.

The claws at the tips of Sabretooth's fingers have been bonded with Adamantium, rendering them extremely resistant to all types of physical damage. The adamantium has only further enhanced the razor sharp edge to his claws, allowing them to rend almost any substance. He also has four retractable adamantium claws implanted and housed in his forearms, much like Wolverine.

Like this? Let us know!
Retrieved from "https://marvel.fandom.com/wiki/Victor_Creed_(Earth-1610)?oldid=6448598"
Community content is available under CC-BY-SA unless otherwise noted.