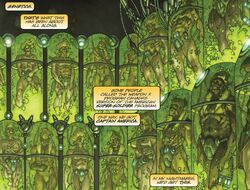 This army of Clones of Victor Creed a.k.a. Sabretooth was created by Romulus with the intent of use them to substitute the real Sabretooth in his missions.[2]

The first clone who appeared was believed to be the real Sabretooth; he was brutally killed by Wolverine in the forests of Alberta, Canada.[3]

This clone's soul later appeared to Wolverine in Hell.[4][5]

The entire army of clones appeared in the Weapon X Facility when Logan and Romulus' sister, Remus, were searching for Romulus to kill him; while the real Sabretooth escaped, the other clones were all killed in the battle.[2]

Retrieved from "https://marvel.fandom.com/wiki/Victor_Creed_Clones_(Romulus)_(Earth-616)?oldid=6098774"
Community content is available under CC-BY-SA unless otherwise noted.