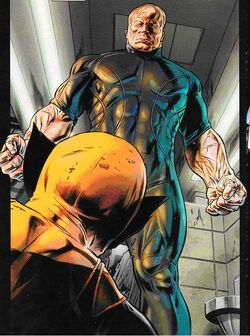 Since the death of Victor's mother, Bernice, the mysterious figure known as Romulus took Victor Hudson under his wing. Victor eventually became the right hand-man of Romulus because he could be tortured without revealing information due to being born blind and mute.[1]

He fought Wolverine and was killed by him.[2]

Unknown, but seems able to toss Wolverine just like he is a small toy so he can at least lift 2 tons like Logan. Class 10

Victor Hudson is blind and mute

Like this? Let us know!
Retrieved from "https://marvel.fandom.com/wiki/Victor_Hudson_(Earth-616)?oldid=6490675"
Community content is available under CC-BY-SA unless otherwise noted.