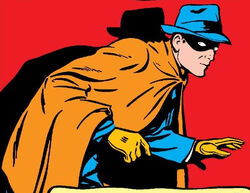 Victor Goldstein was a wealthy sportsman, businessman and raconteur who lived in New York City. He had a wife named Laura and a son named Robbie. Of Jewish descent, Victor decided to hide his ancestry in order to get ahead in business during the anti-semitic world that he lived in and legally changed his family's last name to "Jay". He continued to live in wealth, enduring the racist jokes of his colleagues.

A man prone to escapisms, he ended up spending less time with his family when he developed the costumed identity of Mister E and began fighting crime.[2]

Having become rich as a sportsman, Victor Jay decided he wanted to try another career. Donning a cape and domino mask, he became the crime fighter Mister E. His arch-nemesis was the Vampire, a rogue scientist who used a gas which could cause people's hearts to explode. How they came to be antagonists remains unrevealed.

Mr. E's only recorded adventure before getting involved during World War II, was in investigating the mysterious deaths of shareholders of the Snead Oil Company. Mr. E would connect the deaths, actually clever murders, to his old foe the Vampire. Mr. E would then prevent the Vampire from extorting Mr. Snead into paying an exorbitant bribe, turn over his company, and force his daughter to marry him. In the scuffle, the Vampire would escape when authorities arrived on the scene.[3]

In the summer of 1941, Mister E came to the aid of New York City when it was struck by a massive tidal wave created by the Sub-Mariner.[4]

By 1945, Mister E had joined the military in fighting the Nazis during World War II. He was awed and humbled and found it difficult to fit in with other costumed heroes, particularly those with super-human abilities who viewed him as nothing more as a fame seeking "tourist". He made close allies with the Phantom Reporter and was disturbed when hearing the Witness' stories about the discovery of Auschwitz.[5]

On April 25, 1945, Mister E and other heroes participated in an attack on Berlin, Germany. He joined Blue Blade, Witness, Fiery Mask, Laughing Mask, Phantom Reporter, Captain Wonder, Rockman, Mastermind Exello, Black Widow, Dynamic Man and the Electro in storming the headquarters of the S.S. to search for snipers. They walked into a trap set by Nazi agents and were gassed and placed into suspended animation to be experimented on later. However, the Soviets soon help beat back the Nazis and all those involved in the heroes capture were killed in action. Mister E and the other heroes were then forgotten for many years....

... Until they were uncovered during a construction project in the 21st Century. Their bodies were recovered by the United States government who decided to revive the heroes in the hopes that they would represent the government. Mister E and the others all agreed to work with the government forming a group loosely called the Twelve.[6] Victor and the others were soon put up in a government owned mansion to spend the next year getting used to the 21st century and deciding if they wanted to go back into costumed heroics.[7]

The military soon tracked down his daughter and son and Victor learned to his surprise that they had taken back their original family name. Meeting his son, now in his sixties, he found his homecoming was not welcome. His son berated Victor for his denial of their heritage and how after he disappeared they reverted back to their family name despite the scorn and ridicule they faced. Robert then told Victor that he could spend five minutes with his mother and then leave and not darken their doors again. Victor spent the time with his wife, finding her in a coma and life support suffering from a terminal illness. Breaking into tears he apologized to his wife and then left in shame. When he returned to the mansion, he covered up his disgrace, telling his fellows that he had decided to stick with them as he could not abandon them.[2] However, Victor mostly kept to himself and during a going away party for Mastermind Excello, he admitted to the Witness that he was Jewish, and the Witness informed him (angrily over Victor's shameful admission) that he was as well.[8]

Victor stuck mostly around the mansion from that time, present on the evening that Dynamic Man remotely used Electro to kill homosexual men at a bar.[9][10] On the night Dynamic Man used Electro to murder the Blue Blade, Victor was one of the members of the Twelve summoned by Mastermind Excello to discuss a coming danger to the group. He was then informed that his wife had passed away in the night.[11] Victor attended the funeral and at her grave he came to terms with the guilt he felt for leaving his family and being ashamed of his heritage. After paying his final respects and making these admission, he was overheard by his son and the two reconciled their differences. He was then called back to the mansion where the Phantom Reporter called the entire group together and revealed that Dynamic Man was the on responsible for the murders.[12] Victor narrowly avoided being crushed when Dynamic Man caused the mansion to collapse. In the aftermath of the battle, Dynamic Man was destroyed and Fiery Mask was killed. At Fiery Mask's funeral, Victor made the decision to retire from heroics realizing what it had cost him and his family.[13]