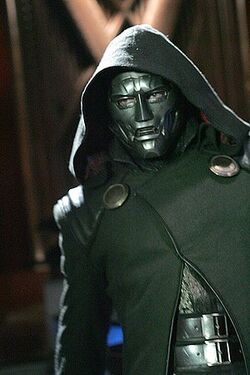 I've always wanted power. Now I have an unlimited supply.

Victor von Doom was a billionaire industrialist and an old college rival of Reed Richards. In addition to funding Richards' trip to space, he had also accompanied the future Fantastic Four on the ship. He received superpowers in the same accident that created the Fantastic Four.

Here, he was endowed with two abilities by the cosmic rays. Exposure to the rays imbues him with electrokinesis, and an injury caused by a piece of irradiated shrapnel from the shields intended to protect the station steadily began to mutate his body into an organic-metallic compound. Doom accelerated the process to completion by exposing himself to a duplicated version of the cosmic rays. However, this process deformed his face, so Doom angrily donned his mask to hide his face. After a fight with the Fantastic Four, Doom was apparently killed, and his body was transported back to Latveria.[1]

The Silver Surfer's movements around the globe brought him past Latveria, where the cosmic energy emanating from him affected Victor von Doom, freeing him from two years as a metal statue. Doom, able to move again but scarred, traced the Surfer to the Russell Glacier and made him an offer to join forces. When the Surfer rebuffed him, Doom attacked. The Surfer returned fire, blasting Doom through the ice. The cosmic energy of the Surfer's blast healed Doom's body. Doom leveraged his experience into a deal with the American military, who forced the Fantastic Four to work with Doom. Doom, pursuing the power in the board, stole it from the compound, using the device he secretly created earlier to gain control of the board and its powers. The Fantastic Four rescued the Surfer, and pursue Doom in the Fantasticar, confronting him in Shanghai. During the battle, Sue was mortally wounded. With the Surfer powerless, Johnny absorbs the combined powers of the entire team in order to battle the cosmic energy-empowered Doom. Johnny succeeded in breaking Doom's control over the Surfer's board, while Ben Grimm uses a nearby crane to knock Doom into the harbor, where he sank to the bottom of the sea.[2]

Like this? Let us know!
Retrieved from "https://marvel.fandom.com/wiki/Victor_von_Doom_(Earth-121698)?oldid=6080488"
Community content is available under CC-BY-SA unless otherwise noted.