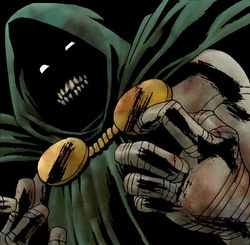 Little is detailed about Dr Doom's life before the zombie plague arrived on Earth-2149, however it can be presumed that it followed much the same path as the Doctor Doom of Earth-616.

While America is falling to the zombie contagion, Nick Fury makes a trip to Latveria, to try to get Doom on side, but he has supreme confidence in his mystical powers to keep Latveria safe, and refuses to join Nick’s resistance.[1]

At some later point, Castle Doomstadt is besieged by zombified Super-Heroes but Doom is holding them back with a magical force-field. However Enchantress has managed to gain entry to the castle, and is now being held prisoner. Doom later grants access to Scarlet Witch and Dazzler in the Quinjet, but quickly tires of their companion, Ashley J. Williams’s, wise-cracks.

Ash points out that he doesn’t need his help, and that he just needs the Necronomicon, but Doom explains that the contagion is extraterrestrial, pan-dimensional, but not supernatural and orders Ash thrown in the holding cells.

Ash manages to destroy some Doombots, so Doom shows them a feed of outside, where Goliath is still doggedly attacking the magically protected castle. To make an example of what happens to trespassers Doom launches a salvo of missiles at the gigantic zombie, they stick in his body and blow him apart. At which point he once again orders Ash removed and placing with ‘the others’. Scarlet Witch begs Doom for clemency as Ash is dragged to a large chamber filled with Latverian refugees by Doombots.

Doom explains to Dazzler and Scarlet Witch, that he is saving Latveria with these refugees, but Dazzler points out that there are no children or elderly, just those of breeding age. Doom tells them that everything has changed, and though it is only a matter of time before the full force of the Marvel Zombies descends on Castle Doomstadt, he offers them hospitality in the meantime.

During the 5 course meal, Scarlet Witch slips out, and then later both of his guests make themselves scarce. Doom is marching through the corridors when he sees Enchantress with her teeth clamped around Dazzler’s finger, and so he kills them with some kind of blast.

He threatens to do the same to Ash and Scarlet Witch, but is interrupted by a subordinate who tells them that the Super-Zombie horde have cleared Latveria and the surrounding countries, and are back for the remaining survivors.

The huge mass of zombies attack Doomstadt, and eventually several of the horde break through the forcefield, leading to Scarlet Witch being bitten by the zombified Punisher. In her last moments, she begs Ash to find the Necronomicon and stop all this. As Ash disappears, Doom, too, makes a tactical withdrawal to an interdimensional teleporter.

Not quite quick enough it would seem, because although he manages to get the survivors to the teleporter, he is bitten in the process, and has to fight the contagion flowing through his body. Just as he getting the last of the survivors out, Ash dashes into the room. Though tempted to eat Ash, Dr. Doom resists as he considers Ash to have allowed him revenge against Reed Richards. Dr. Doom allows the man to escape, even giving him the ability to choose one of many realities.

Doom gives Ash brief instructions about the teleporter, and Ash steps through, just as Wolverine, Hulk, and Thing crash into the room. Doom destroys the portal and tells them that there is nothing they can do, as he is already infected, but Thing says he can still give him a "clobberin’!"[2]

When his transformation is complete, Doom makes his way to New York, and arrives there in time to meet up with a group of similarly zombified super-villains, and when Galactus arrives, they attack the World Devourer.

He proves to be too strong for them alone, but then the Power Cosmic Zombies blast him with a special contraption, and the two groups of zombies face off for the remains with Doom's group coming off worse, being presumably killed.[3][4]

Like this? Let us know!
Retrieved from "https://marvel.fandom.com/wiki/Victor_von_Doom_(Earth-2149)?oldid=6076613"
Community content is available under CC-BY-SA unless otherwise noted.