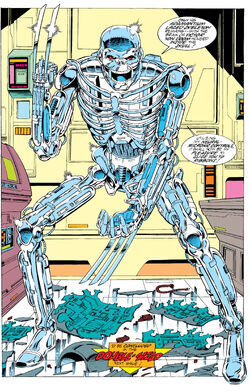 During the invasion of Earth by the Martian Masters, Victor Von Doom fought alongside the heroes of Earth, standing shoulder-to-shoulder with Captain America, Franklin Richards and the Silver Surfer. Unlike most of Earth's defenders, Doom survived the war, though most of his activities during the next thousand years are unknown.[1]

At some point, Doom killed Logan, and had his brain transplanted into the mutant's adamantium coated skeleton. This would not be known to the world at large, who by the 31st century believed that Doom had been dead for centuries.[2]

Following the defeat of the Badoon, Doom planned to take control of the world through the addictive entertainment system 'Realitee-Vee'. After establishing a network of broadcasting towers, he succeeding in destabilising Earth and creating a state of anarchy, but his ultimate plans were foiled when the Guardians of the Galaxy succeeded in destroying part of his network. Doom remained unexposed, however, and blame was placed on the Badoon he had used as lackeys.[3]

Soon after, the mutant Rancor travelled to Earth in search of her ancestor, Logan. Doom – hooded and cloaked to disguise his use of Logan's skeleton – was able to forge an alliance with her, and she agreed to help him re-establish his Realitee-Vee network.[4] However, Rancor always intended to betray Doom, eventually ambushing him in an attack with one of Logan's severed claws. The attack failed, and Doom revealed the truth about his new body.[2]

In the ensuing fight, Doom would lose one of his eyes. Although he would emerge triumphant over Rancor, the arrival of the Guardians of the Galaxy forced him to abandon his plans and flee Earth.[5]

Seemingly those of the Victor von Doom of Earth-616. In addition, Dr. Doom's brain now inhabits the skeleton of Earth-691's Wolverine, granting him an indestructible skeleton and razor-sharp claws.

Like this? Let us know!
Retrieved from "https://marvel.fandom.com/wiki/Victor_von_Doom_(Earth-691)?oldid=5820400"
Community content is available under CC-BY-SA unless otherwise noted.