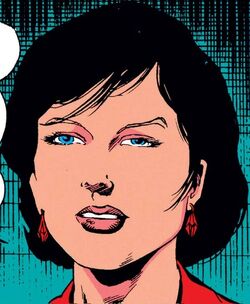 Victoria Bentley was the daughter of a wealthy professor (and secretly, a sorcerer), Sir Clive Bentley, and an unknown mother.

When her dead father was impersonated by Baron Mordo to call upon Doctor Strange, Strange arrived to investigate. He confronted Mordo, who had laid a vapor trap. Strange was able to summon Victoria to help. Mordo noticed her potential and claimed Victoria would be a threat if she ever learned to use it. Strange defeated Mordo, and told Victoria to lead whatever life she deemed fit. He decided against taking her as an apprentice, as Mordo would certainly attack again.[2]

Much later, the Living Tribunal sent Dr. Strange on a quest to restore balance to the reality: Strange had unwillingly released a great amount of evil magic power, so that many potential wizards were discovering great power and using it for crimes. Victoria Bentley, her will bended by the circumstances and her memory fuzzy, became one of those evil sorcerers. The sorcerers gathered as a team, the Circle Sinister, and released Mordo from an extra-dimensional bondage so that he could lead them, while Strange was doing his best to prevent that.[1] However, Strange failed in his quest and Mordo exiled him to a different dimension ruled by Nebulos, Lord of the Planets Perilous.[4]

Bentley, still Mordo's servant, returned to her London flat and, distrusting her master, used her powers to clear her own mind. She remembered her previous encounter with Mordo and Strange, and immediately was sent to the Planet Perilous.[4] Nebulous intended to use Bentley as his hostage to make Strange perform a quest for Nebulos.[5] Indeed, Nebulos sent Strange to Earth so he could defeat Mordo and absorb all the evil power in a Staff - and meanwhile, he sent Bentley to a different world,[6] the one ruled by the so-called supreme scientist Yandroth.[7] Strange defeated Nebulos and followed Bentley's track to Yandroth's world.[6]

The alien Yandroth determined through calculations that she was the most suitable being on Earth to become his bride and queen, and abducted her.[7] Doctor Strange was able to free her, in a fight that took them to the Dimension of Dreams and ended with Yandroth being exiled there, becoming a dream himself. After being released, Bentley's memory became blurred again, unable to retain memories of the unusual events.[8]

Bentley returned to her previous life as a British socialite but, when she was magically summoned to the Americas by Doctor Strange, she quickly agreed to help him in a dangerous inter-dimensional quest to find Clea, a trapped woman from a different dimension for whom Strange had romantic feelings.[9] While Bentley herself secretly loved Strange[10] and had hoped for him to reciprocate her feelings, she agreed to help him, understanding the gravity of the situation. Bentley still did not have magic powers herself, but Strange needed a female magician to cross to that dimension. Once there, however, she was paralized by fear, and Strange agreed to leave her under the protection of the Shield of the Seraphim - while he had expected her to be braver, he could not judge her because she had done everything she could with her light training.[9]

Unfortunately, even with the Shield, Bentley was captured by the same villain who had captured Clea: Dormammu. Dormammu then captured Strange and, leaving a Guardian, left to conquer a different dimension. Strange then released himself, defeated the Guardian and released the female captives. Hearing him speak romantically to Clea, Bentley retired to weep. Strange, wanting to confront Dormammu on his own, then sent Bentley and Clea[10] to his mansion on Earth, where they were welcomed by Strange's butler Wong and then confronted by rude, sceptical interloper Charles Benton. Dr. Strange was captured again and sent a mental command to his female friends: Clea then found a way to help Strange even from Earth: By using the Orb of Agamotto, Clea and Bentley planted a suggestion in the mind of Dormammu's ambitious sister Umar to release Strange. While Bentley's powers were dormant, Clea used her own magic to channel those to Umar, unleashing a decisive event that allowed Strange to claim victory and return to Earth.[11]

Immediately after that, Strange received a telegram summoning him to meet an English sorcerer, Lord Nekron. Strange and Bentley went together to England and to Nekron's home. Nekron agreed to receive Strange's date, even if he was unfamiliar with her. Once in the mansion, Nekron offered them a secretly drugged drink that left Bentley unconscious. Nekron then sent Strange to "a world gone mad", intending to defeat him - but, as Strange knew that Nekron had limited time, he magically sped up time and thus defeated Nekron forever. When Bentley woke up, with no memory after the toast, Strange explained his victory to her while she drove them both to London - and, once there, Strange flew away, with Bentley sighing for him.[12]

Returning to her privileged life, Bentley took home in her family castle and hosted a number of social events, including a masquerade where she met her new neighbor, American Dane Whitman (a descendant of the British Garretts living at Garrett Castle), whom she also found attractive. Secretly, Whitman was the Avenger called Black Knight, and indeed he had attended the masque in his superhero uniform.[13]

Meanwhile, Doctor Strange had the need of an allied sorcerer to anchor him while he travelled on a mission to the Sixth Dimension and, discarding the old Ancient One and the weakened Clea, he resorted to Bentley. He astrally visited her in her party, and there he met the Black Knight, whom he recognized as a supernaturally-induced hero and whom he recruited as a partner for his quest. In the process, Whitman revealed his identity to Bentley, who assisted them in their interdimensional quest. The mission was again successful.[13]

Some time later, most magicians -including Bentley at her home- suddenly perceived the importance of the duel that Dr. Strange was having at that same moment against the demon Shuma-Gorath: While Bentley and the other magicians may have been unaware of Strange's quest, they knew that Strange was battling to protect the soul of the whole humanity. However, nor Bentley nor any other person could have done anything to affect that fight - which ended with Strange's victory.[14]

Victoria also helped a young Betsy Braddock learn to control her telepathy. When the reality-warping mutant Mad Jim Jaspers was elected Prime Minister of Great Britain, he persecuted other mutants and superhumans, having them captured and put in internment camps. Victoria was one of those captured, and became close to both Betsy and her friend Alison Double, who had both been interned as well. When Jaspers had been defeated and the camp dismantled, Victoria invited the two women to recover from their ordeal at her castle.

When Strange began using black magic, he used a spell to steal Victoria's magic potential. This was returned to her after the defeat of Shuma-Gorath.

Victoria also befriended the Black Knight. His inherited castle neighbored her own land. She assisted Dane on many occasions, often maintaining the castle when he was busy on Avengers missions and while he and Sersi were in exile. She was killed, accidentally, by Bloodwraith while he fought Deadpool.[15]

Magic: Victoria possessed great magical power, although she seemed to be unaware of it herself. This power could be detected by others, especially magic users.

It was claimed by Mordo that she would be a threat to him and others if she ever gained control of her powers.

Doctor Strange (Stephen Strange) was able to temporarily gain her power through the use of black magic. It is unknown if Baron Mordo or other sorcerers planned to do this as well.

Like this? Let us know!
Retrieved from "https://marvel.fandom.com/wiki/Victoria_Bentley_(Earth-616)?oldid=6090514"
Community content is available under CC-BY-SA unless otherwise noted.