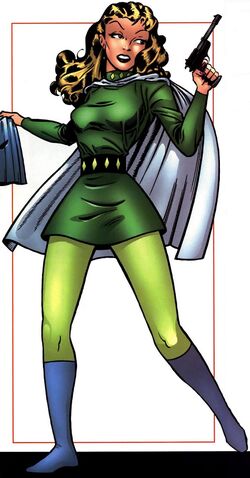 The villainess known as the Asbestos Lady hated the original Human Torch. With every intention of doing battle with the Torch, she designed for herself a costume made from asbestos, which essentially made her immune to fire while wearing it.

Eventually, the Asbestos Lady heard about several advancements in "asbestos science" developed by Fred Raymond, and wished to have them for herself. To this end, she tried to force Fred into joining her growing gang, but the Human Torch had been watching Raymond's home in case such an attack took place.

After she was repelled by the Torch, the Asbestos Lady decided to bump off the Raymond family as revenge. She arranged a train wreck that resulted in the death of all on board except for youngest Raymond, Thomas, who was apparently immune to the ensuing fire.

Intrigued, the Asbestos Lady kept an eye on the youth after he joined a circus act (taking advantage of his immunity to fire), but she was again waylaid by the Human Torch who defeated her by melting her boots to the asphalt road[1].

Some time later in 1947, the Asbestos Lady's twin brother Killer Murdock was brought to justice by the Human Torch and Toro, now a crime-fighting duo; Murdock was executed for his crimes. Asbestos Lady became determined to wipe the two heroes out. In her first attempt, she gathered her brother's old gang to try and eliminate the heroes but the plan failed, although Asbestos Lady managed to escape[2]. She later lured the vacationing heroes into a trap where she tried to drown them in a river with an asbestos-lined net. Thinking her foes dead, Asbestos Lady and her gang started a crime spree until she was finally apprehended by the Torch and Toro for attempting to rob the gold stored at Fort Wright. Asbestos Lady was apprehended and locked away in prison, vowing to get revenge against the Torch and Toro[3]. She later escaped from jail and was used as a pawn of the Organizers, an agency that funded super-villains in order to keep them distracted from their activities[4]

Victoria Murdock died of idiopathic mesothelioma at age 45 (presumably from asbestos exposure).[5] Her disease was a type of cancer.

Murdock was a gifted scientist.

Like this? Let us know!
Retrieved from "https://marvel.fandom.com/wiki/Victoria_Murdock_(Earth-616)?oldid=6126779"
Community content is available under CC-BY-SA unless otherwise noted.