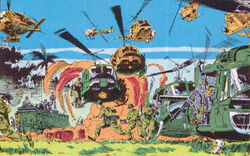 In 1954, after the First Indochina War, Vietnam received their independence from the French Empire thanks to the rebellion lead by Ho Chi Minh. The country was divided into the democratic South and a Communist North. In 1956, South Vietnam, with American backing, refused to hold unification elections.[1] In 1958, the Viet Cong, had begun to battle the South Vietnamese government. Over the next few years the US sent a large number of troops over to the country.[1]

In 1963, the military condition deteriorated, and South Vietnam had lost the fertile Mekong Delta to the Viet Cong.

In 1965, President Lyndon B. Johnson escalated the war, commencing air strikes on North Vietnam and committing ground forces. This lead to the battle of Ia Drang, the first major battle of the war in which the US was involved, located at the eastern foot of the Chu Pong Massif in the central highlands of Vietnam. One squad of troops was sadly outnumbered by the Viet Cong.[2]

In 1966, S.H.I.E.L.D. excavated the body of a primordial symbiote and extracted samples of its biomass that they bonded to a group of wounded soldiers.[3] These symbiote-augmented super-soldiers were sent on black ops missions, but the primordial symbiote was indwelled by a malevolent entity that possessed the ability to control symbiotes and send them into feral rampages. Despite some initial success, the Sym-Soldiers quickly succumbed to their symbiotes' bloodlust, went insane, and began devouring Việt Cộng and American soldiers alike. S.H.I.E.L.D. director Nick Fury subsequently declared the Sym-Soldiers a liability and contacted Logan to assist him in hunting them down.[4] One of the symbiotes impersonated its late host, Rex Strickland,[5] and joined them in subduing its brethren, becoming an Agent of S.H.I.E.L.D.; while the other Sym-Soldiers were cryogenically frozen.[6][4]

In 1968, Frank Simpson was sent to Vietnam War as a black-ops agent. Captured by the Viet Cong, Frank was severely tortured by Logan (who was posing as a Russian intelligence liaison), shattering Frank's still unbalanced mind. While torturing Nuke (even carving into his face the American flag that years later would become part of his super-powered personality) Logan implanted the phrase "No V.C.!" as a trigger word, along with the compulsion to kill gruesomely, in retaliation for the tortures he suffered, anyone who uttered the words. He then allowed Frank to escape, testing his work with a village of peasants, who, seeing an American soldier, tried to soothe his anger and convince him to spare them, shouting the "No V.C.!" phrase, meaning that they weren't Viet Cong. Frank, in response to the trigger word, burnt the village to the ground killing every inhabitant.[7][8]

In 1968, Victor Creed was serving in Vietnam, and during this time he killed a number prostitutes.[1] While in Saigon a man known as the "White Devil" was rumored to be involved in the disappearance of soldiers and locals. Creed was offered a job leading his own team of enforcers he happily accepted.[9]

In 1969, Frank Simpson was recruited into Project Homegrown: the next project of the Weapon Plus program. They began experimenting on soldiers who served in Vietnam. Many died, such as Andrew Perlmutter, Michael Labash, John Walsh, James MacPherson and fourteen other unnamed recruits. The only known successful subject was Frank Simpson codenamed "Nuke", who had armored implants under his epidermis and was given Adrenaline Pills to alter and control his mood.[10]

In 1970, President Richard Nixon tried to stop the supply lines from Cambodia. This act violated Cambodian neutrality and provoked antiwar protests on the nation's college campuses.

In 1973, an agreement was reached; U.S. forces were withdrawn from Vietnam, and U.S. prisoners of war were released. In 1975, South Vietnam surrendered to the North, and Vietnam was reunited.[1]

In Earth-200111, Second Lieutenant Frank Castle served during the Vietnam War and was assigned to Hill 861 during his first tour of duty in 1968.[22] In 1972, after what happened at Firebase Valley Forge, Frank Castle was brought to a military hospital in Da Nang.[23]