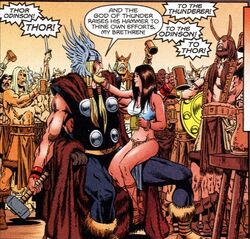 The Vikings, were Norse seafarers, mainly speaking the Old Norse language, who explored, and traded and raided from their home in Scandinavia, on Midgard during the 8th century to late 11th century. They settled in the lands of Britain, Ireland, Iceland, Greenland, Vinland, Normandy, Germany and other areas of Europe.

Scandinavia was founded 10,000 years ago after the last Ice Age. Hunters followed herds of animals to the green pastures of Scandinavia, bringing with them the worship of the Asgardian gods. They existed in various independent clans.[1]

A group of Norsemen arrived on the shores of England, led by Lief the Lucky who sought to take over the kingdom of Camelot. Sir Percy of Scandia was attacked off-guard by Lief and his men attack, while Lady Rosamund was taken prisoner. Sir Percy followed after Lief and his army. Lief had come to find Rosamund to be quite fair and decided to take her home with him. Black Knight arrived and attacked. The Black Knight easily fought off Lief's forces and road after his boat before it could get too deep out to sea. The Black Knight attacked their ship, grabbing Rosamund and pulling back as the Norsemen fled the scene.[2]

The Gaetish warrior Beowulf came to the aid of the Danish King Hrothgar, whose kingdom was under attack by the dark elf Grendell and his mother.[3][4] At some point, Scandinavia was attacked by a symbiote-dragon that destroyed several villages before being defeated by Thor.[5]

In 872 A.D. they were united by Harold Haarfager into the Vikings, these Norse sailors then went forth to trade, explore, and raid much of Europe.

In 885 A.D, Sersi battled alongside Thor and the Vikings in Siege of Paris.[6]

In 893 A.D, on the western coast of Iceland, the village of Kolkumyrar was attacked by a group of Frost Giants. The village prayed for help and Thor came to their rescue slaughtering the Jotuns. The villages celebrated with Thor until they found a body wash up in the stream revealing it to be an Asgardian. Thor decides to return to the celebration as the villages collected wood for a funeral pyre to burn the body.[7] After the celebration Thor was woken from his slumber by a mysterious voice, but found nothing.[8] He would regularly return to the village to live among the people as he respected them due to ability to live through such hardship.[9]

Later 893 A.D., Thor sailed on the Baltic Sea with a band of Vikings who journeyed to the banks of the Neva River to confront the Slavs' Gods.[10]

In 894 A.D., Thor saved a Viking village in the Faroe Islands from Skabgagg the Dragon.[11]

In 896 A.D., Bodolf became a great warrior by praying to Thor before every single one of his battles, with the God of Thunder usually appearing in the flesh to help him fall his enemies, but over time he became cocky and forgot to pray. With his army routed, his lands seized, and his wealth gone, Bodolf resorted to praying once again, but to a different god, Loki. Loki eventually appeared before Bodolf and directed him in a quest for power to rival Thor. Bodolf embarked in a journey to kill a dragon and drink its fiery blood. He drank his blood becoming a monster.[12] With his newfound power, he battled Thor. After a furious battle that took them across the globe, both warriors returned to Norway. When Loki began to cheer for Bodolf, the viking soon attacked the god, unwilling to be a puppet. Thor caught a second wind and punched Godolf through the Earth to the southern pole of the planet. The defeated viking proceeded to wander the Earth, fighting to suppress the monster inside him.[13]

The Vikings in there ships were one of the few groups of humans that encountered the Inhuman city of Attilan when they were hidden from the rest of the world.[14]

Around 1000 A.D., Vikings landed on parts of North America and declared it for Odin and the Asgardian gods whom they worshipped. This conflict led to a brief skirmish between the Asgardians and the Anasazi. The Asgardians backed off from invading North America, but Manabozho and Odin, ruler of the Asgardian gods, formed an alliance to defend Earth from danger posed by the alien Celestials. Manabozho and Odin then met with the heads of the other races of gods who were or had been worshipped on Earth to discuss the Celestial's possible threat to Earth.[15]

In 1003 A.D., the coastal village of Lakstad was wiped from the map when Harald Jaekelsson and his crew murdered the entire population of the town.[16]

The Spirit of Vengeance protected the shores of early America, leading warriors to the fight against Vikings marauders.[17]

During the age of vikings; Varnae traveled to the new world and attacked a Norse colony in North America turning the settlers into Vampires. A young girl escaped and prayed to the gods for help and Thor answered the call and battled the hordes of Vampires and eventually facing the first vampire himself. He was able to drive off Varnae and destroyed the vampire settlers by directing sunlight at them leaving only the young girl alive.[18]

During this time, Thor faced off with the Celestial-powered being called Apocalypse. Seeking revenge, Thor blessed Jarnbjorn with his own blood to imbue it with the power to pierce Celestial armor.[19]

Odin caused Thor to live on Earth in the mortal guises of the Germanic heroes Siegmund and his son, Siegfried. In these two roles, Thor played a major role in Odin's efforts to regain the dangerously powerful Ring of the Nibelung. The warrior Hunding killed Siegmund, but Thor was reborn as Siegfried, the son of Siegmund and his lover Sieglinda. Siegfried took possession of the Ring after killing the giant Fafnir, who guarded it in the guise of a dragon (this Fafnir is not to be confused with the former king of Nastrond). Siegfried then fell in love with the Valkyrie Brunnhilde, but was murdered by Hagen, the son of Alberich, the dwarf who had created the Ring and placed a curse upon it. Odin, however, resurrected Siegfried as Thor, who again had his full godly powers, but wiped out Thor's memory of his two mortal identities. (It is unclear how much, if any, of this account by Odin's severed eye is true.)[20]

The Vikings later converted to Christianity and the Asgardians withdrew from Midgard.[1]

In 1248 A.D., a group of Vikings were exiled from Norway and traveled west along the Atlantic. They eventually settled on an uncharted island where they lived in seclusion for many centuries until the 20th Century.[21]

During World War II; Adolf Hitler succeeded in contacting Thor and deceived him into aiding the cause of the Germans, the descendants of the people who had once worshiped him, in the current war. Thor therefore clashed with the Invaders and nearly killed the second Union Jack with a blast of lightning from his enchanted hammer. Learning that Hitler was evil, Thor vowed to aid him no more, and withdrew most of the electricity in Union Jack's body back into his hammer, somehow restoring him to health in the process. The second Union Jack now possessed the superhuman power to discharge electrical bolts from his body.[22]

The Vikings worshiped as gods powerful extradimensional humanoid beings known as the Asgardians. They lived in Asgard, a small "pocket dimension" which could be reached via the Bifrost, the rainbow bridge. These beings helped to form the Viking civilization.

The Vikings believed when they died they went to Realm of the Dead, Hel. It was ruled by the Asgardian Hela. She judged the souls and they were either sent to either Nifleheim for punishment or Valhalla, Viking Heaven.

In Earth-991; the Vikings built permanent settlements in America after the Mongol Empire took control of Europe and North Africa.[23]

In Earth-22260, most of the Asgardians were killed off ages ago. As such, the Viking never officially encountered beings connected to Asgard and didn't worship them. Classic norse mythology was considered a fictional tale told by a storyteller who was actually Loki, who had integrated himself into a viking community.[24]

Retrieved from "https://marvel.fandom.com/wiki/Vikings?oldid=5704881"
Community content is available under CC-BY-SA unless otherwise noted.