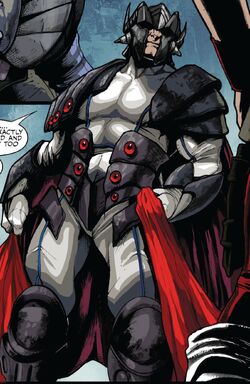 The hunter has returned. Now...now we will rebuild Leviathan from the bones of the new S.H.I.E.L.D. And once more, the world will tremble.

Viktor Uvarov (Russian: Виктор Уваров), alias Orion, is the Leader and founder of Leviathan, an organization based in Russia that was created for the sole purpose of world domination. His followers have awakened him after 14 years in suspended animation, in order to complete his main goal of destroying Nick Fury and Baron von Strucker.

Great Wheel of The Zodiac

Uvarov, along with other agents Vasili Dassaiev, John Garrett, Shoji Soma, Cornelius van Lunt, Baron Strucker, Dum Dum Dugan, Nick Fury, Jake Fury, Daniel Whitehall, and Thomas Davidson were called by Leonardo Da Vinci, alias Aries, to form the Great Wheel of Zodiac. Each member was assigned a codename from the Zodiac Calendar. Uvarov was given the name Cancer. The group consisted of the best covert intelligence agents from around the globe. After only a few key missions for Da Vinci, Da Vinci would provide them resources that would be of great value to their own separate agendas.

The Great Wheel later fell apart due to the betrayal of Viktor Uvarov and Vasili Dassaiev. As a result, the broken Wheel led to the creations of S.H.I.E.L.D., Hydra, Leviathan, and the Zodiac Cartel.[3]

Uvarov made contact with Contessa Valentina Allegra de Fontaine after her parents, who were seemingly double agents for both Russia and the USA, were killed by a bomb in Rome. Two days later, she was weeping in a church before their coffins. She was then approached by Uvarov who addressed her as "comrade". Contessa demanded to know why he didn't contact her sooner, as the Consulate had been asking questions about her paperwork. Uvarov promised her that nothing was wrong and promised that she could continue her parents' work as undercover agents. Moreover, he promised a higher position for her. The day after, at her parents' funeral, the Contessa was approached by Dum Dum Dugan, who commented on how her parents worked against communism. He then offered to recruit her into S.H.I.E.L.D. [1]

When Hydra arrived at the Leviathan base Long Winter in Siberia, they found it deserted, except for a few squads left behind and the corpse of Viper. One Hydra agent brought Baron von Strucker a holographic recorder, which projected an image of Orion, whom Strucker recognized as Viktor Uvarov. When the device recognized his voiceprint, Orion's message played that despite the unfortunate mishaps between their two organizations during his sleep, they should meet at the Crown in three days.[4]

Orion, Magadan, and Contessa Valentina Allegra de Fontaine arrived to meet with the leaders of Hydra. The Contessa was shocked to see Viper alive, with tentacles on her head. As the meetings began, Orion requested an offer of subservience from Hydra. Strucker refused and ordered Gorgon to kill him.

However, Orion survived a stab to the shoulder as Magadan whacked him away with his hammer. It was then that a Leviathan squadron attacked. The leaders of both sides escaped the destruction of the Crown.[5]

As a result, all-out war was declared between Hydra and Leviathan. Both terrorist organizations went to extreme lengths in their methods, such as taking out entire bases without regard for civilians. Eventually, the Leviathan thought to make a ceasefire, only for one of their leaders, Magadan, to be assassinated. In retaliation, Leviathan took out a Hydra recruitment center in Seattle.[6]

At the newest Leviathan base, Perestroika, Orion, and Contessa Valentina Allegra de la Fontaine plotted to assault Gorgon and Madame Hydra. Then suddenly, all their Leviathan soldiers began to self-destruct. They blamed this hit on Fury.[7]

A now old and sickly Orion sent a Russian mercenary squad to hunt down and kill Nia Johnson, a former CIA agent and lover of Nick Fury, using the riots caused by the Serpent's fear-spreading as cover for the murder.[8]

Her murder was all a ploy to capture her son. Orion sent a group of mercenaries to hunt down and capture Marcus Johnson.[9] He also sent Taskmaster to fight him but he was stopped by Captain America and S.H.I.E.L.D.[10] They also ended up fighting Nick Fury. Marcus and Fury were captured and had his left eye cut out the same way as Fury. During the tests it was then confirmed that Johnson had the Infinity Formula in his DNA.[2]

Fury managed to slip his restraints and give Johnson enough time to escape, but Fury was captured again and brought in to give Orion a blood transfusion to restore him to his youthful state. The transfusion drained Fury of the remaining Infinity Formula in his system. Fury was then tortured and had his mind probed by Orion’s telepath, wherein they found all of Fury’s S.H.I.E.L.D. secrets and fail-safes. Marcus saved Fury with the help of his friend, Phil "Cheese" Coulson. He then attempted to attack Orion with the assistance of the Avengers. They engaged each other in a hand fight but Orion overpowered him. He then told Marcus that it was time for him to die but Marcus replied "You first" and an explosive that Marcus had placed on Viktor detonated, permanently killing him.[3]

Like this? Let us know!
Retrieved from "https://marvel.fandom.com/wiki/Viktor_Uvarov_(Earth-616)?oldid=6495003"
Community content is available under CC-BY-SA unless otherwise noted.