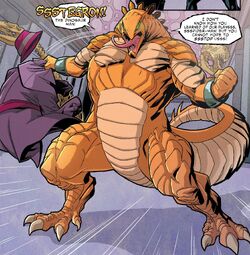 SSSTEGRON! The Dinosaur Man! I don't know how you learned of our plansss, Ssspider-Man! But you cannot hope to Ssstop usss!

Dr. Vincent Stegron was working as an assistant to Dr. Curtis Connors on a project for S.H.I.E.L.D. that used dinosaur tissue supplied by Ka-Zar from the Savage Land.[3]

Vincent became obsessed with the Lizard experiments and decided to steal the dinosaur extract. He fled to the Savage Land and ingested the Connors Formula with the Stegosaurus DNA, turning himself into a Dinosaur Man.

Doc Connors contacted Spider-Man for help and he traveled to the Savage Land, teamed up with Ka-Zar, and found Stegron in full reptile mode, ruling over the Swamp Men. When Spidey and Ka-Zar beat up on his Swamp Men, Stegron escaped to New York City on a flying Ark. Stegron then led a stampede of dinosaurs down Broadway. He was stopped by Spider-Man and the Black Panther and tried to escape on a pterodactyl. Instead he was knocked into the water by Spider-Man and sank like a rock.[4]

Stegron reduced his metabolism and eventually drifted to shore. He returned to Manhattan, kidnapped Billy Connors, and forced Curt Connors to work for him. He created a "retro-generation ray" that animated the dinosaur skeletons at the Natural History Museum. Under the strain of Billy's kidnapping, Curt Connors turned into the Lizard and went after Stegron.[5] Unfortunately, Stegron chose December to start his plan and eventually succumbed to the cold weather. He slipped beneath the ice of a Central Park lake and disappeared from sight.[6]

Somehow Stegron survived, reverted to human form, and became a homeless resident of the park. In the wrong place at the wrong time, he got hit by a stray shot from a Nuclear Blaster wielded by the Vulture and was changed back into the Dinosaur Man. He returned to the Museum of Natural History, with plans to create a race of dinosaur people. but ended up in the midst of a struggle between Spider-Man and his "Lethal Foes", Doctor Octopus, Vulture, Rhino, Beetle, Boomerang, the Answer, Swarm, Strikeback, and Hardshell. Stegron tried to steal the Nuclear Blaster to create his dinosaur army, but instead got blasted into unconsciousness by Strikeback.[7]

Now, growing more and more bestial, Stegron's only desire was to return to his home in the Savage Land. He stowed away on a supply ship bound for Antarctica and got into a S.H.I.E.L.D. observation post where he began killing off scientists. Thunderstrike, the Black Panther and the Black Widow answered the distress call. 'Strike and the Panther released Stegron to the outside elements, and although the Dinosaur Man tried to make it to the Savage Land, he came up just short, felled by the harsh cold of Antarctica.[8]

Return to the Savage Land

Stegron fell into hibernation, frozen inside a glacier. He thawed and joined the Savage Land battle between Spider-Man, Ka-Zar, Shanna the She-Devil, and the Roxxon Oil Company. When the Hulk and Chtylok the Che-K'n Kau arrived to complicate things further, Stegron opted for fighting on the side of the good guys against Roxxon, and walked off into the sunset at the end, vowing to be everybody's enemy in next time they met.[9]

Attempting to Resurrect the Saurians

Stegron later discovered the subterranean home of the Saurians, who had been slain by the Dire Wraiths years prior,[10] located beneath the San Andres Mountains. Stegron attempted to resurrect them using a scepter, but their DNA was combined with the Dire Wraiths', filling them with hatred and malice. These hybrids used the Saurian skeletons as hosts but needed living hosts which they drained of all life. Stegron attempted to return them to the dead but was unable to do so and was kept around because they needed Stegron to bring more to life.

Stegron travelled the Arctic Circle where he stumbled across the 'Rock of Life', an asteroid fragment whose unique radiation sparked life and also affected the proto reptilian portions of human brains, unleashing feral and animalistic behaviour. This first affected animals before spreading to 'monsters' such as Edward Whelan (Vermin) and John Jameson (Man-Wolf) as well as 'mammals' like Spider-Man and the Black Cat. Stegron planned to use this to bring down the cities of man, starting with New York City which he planned to transform and devolve but was foiled by Spider-Man.[11] He later returned to the Savage Land which he helped Ka-Zar protect, along with many of its other denizens, from Roxxon.[12]

Captain America discovered Stegron in the subterranean tunnels after a group of environmentalists were captured by the hybrids and revealed the truth to him before Cap was possessed by the hybrid queen. Hawkeye used a sonic arrow to force the queen's symbiote off of Cap and Stegron told them the hybrids were going to spill out into the world soon and kill all living beings. Stegron returned the surface as the hybrid possessed humans attacked and was instantly overwhelmed until Hawkeye was able to free him. While Cap and Stegron fought the queen, who had possessed a giant snake like creature, Hawkeye got dinosaur bones from the lab and turned them into arrowheads. Stegron was captured and lost his staff to the creatures tendrils. Hawkeye fired these arrows at the creature and Captain America used it to reanimate the dinosaur bones and the guardian was ripped apart by the emerging dinosaurs. Stegron fled the scene while Hawkeye destroyed the last remains of the symbiote queen with incendiary arrows. Stegron was later approached by Kashmir Vennema in the Saurians' empty underground city and handed a vial with an unknown substance to him that could make all his dreams come true.[13]

Stegron later reappeared as an adversary to Spider-Man and the mutant class he was currently in charge of teaching while he and Sauron were at the New York Museum of Natural History touring the dinosaur exhibit. Showcasing a new trick he picked up from his partner in crime, he leeched off two mutants, Hellion and Rockslide. Together, they were able to defeat their enemies and transform Staten Island into their newest colony, convincing Shark-Girl to ally herself with them in the process.[1]

After a brief fight against the enraged "saurianizated" Staten Island's inhabitants, Spider-Man and the mutant students surrendered and were placed in a power-dampening cell. Glob tried to escape the cell, but was caught by Shark-Girl and, as a punishment, he was turned into a dinosaur by Sauron's dino-ray machine. As Sauron prepared himself to leech off their powers, Spider-Man and the mutant students released themselves and started to fight him. Taking advantage of the situation, Shark-Girl lured Stegron into reverting their machine so it could revert Staten Island's inhabitants and Glob back to their original form. A fierce battle ensued between Sauron and Stegron, and both ended up petrified, as their powers neutralized each other's.[14]

Kingdom in the Sewers

Somehow unpetrified, Stegron was released into the custody of Alchemax so that he could assist their development of a healing factor for soldiers. Instead, Stegron used the opportunity to renew his efforts to take over the world and escaped with a number of test subjects and $10 million in equipment. Over the next week, Stegron began abducting hundreds of homeless people and feral animals, converting them into dinosaur-hybrids and forcing them to worship him as a god. When Venom (who had been hired by Alchemax to retrieve him), Moon Girl, and Devil Dinosaur arrived, Stegron seized control of the latter and put his plan to dump an enormous vat of his dinosaur serum into New York's water supply into motion. Working together, Venom and Moon Girl were able to free Devil Dinosaur, sabotage the serum, and knock Stegron unconscious, returning him to Alchemax.[15]

Dinosaur Physiology: After injected himself with a formula similar to the Connors Formula, only with dinosaur DNA, Stegron transformed into an orange semi-humanoid Stegosaurus-like creature.

Considering he was Dr. Conner's assistant and was able to modify the Lizard Formula, it's likely he has similar intellect to his superior.

Like most reptiles, Stegron’s metabolism is slowed by cold, and will weaken him. In severe cold his body will, even involuntarily to him, shut itself down and go into a an hibernating state until he can thaw up again; this can even take several months without damaging him or he will change back into a human.

Like this? Let us know!
Retrieved from "https://marvel.fandom.com/wiki/Vincent_Stegron_(Earth-616)?oldid=6471248"
Community content is available under CC-BY-SA unless otherwise noted.