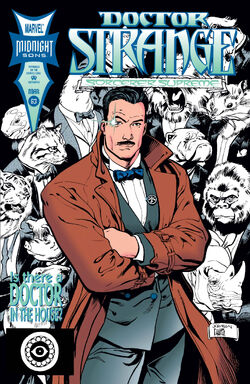 Almost powerless after a battle with Salome, Doctor Strange retreated to a pocket dimension and dispatched two magical constructs based upon himself: Vincent Stevens, to build a fortune to develop so-called technomagick, and 'Strange' to fight alongside the Midnight Sons and gather objects of magical power.

Stevens and Strange rebelled against Doctor Strange, and Stevens was apparently destroyed, while Strange retreated to the Dark Dimension, where he merged with the rebellion's Nobel as Paradox, working beside Clea.

Like this? Let us know!
Retrieved from "https://marvel.fandom.com/wiki/Vincent_Stevens_(Earth-616)?oldid=6191914"
Community content is available under CC-BY-SA unless otherwise noted.