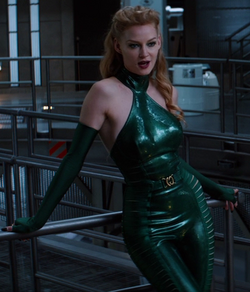 Viper was born a mutant, and gained a number of abilities similar to those exhibited by some venomous reptiles. Her innate understanding of toxins helped her become an accomplished biochemist. It was in this capacity that she came into contact with Yashida, and acted as his personal physician while his failing health took him to the brink of death in his old age.

Yashida wanted to live far beyond his years, and so Viper helped him by incapacitating the Wolverine. In the meantime she used Yashida and others to her own ends, also bending Harada, the leader of the Black Clan, to her will under duress in order to gain access to Yashida's granddaughter Mariko.

Using Mariko as bait, Viper lured the Wolverine to her and ensnared him to strip him of his power. Interference from Mariko and Harada freed him from this entrapment however, and Viper found herself shot in the chest by one of Harada's arrows. She survived the injury and regenerated, only to encounter her adversaries' other ally Yukio who had also come to rescue Wolverine. The pair fought in a duel to the death, which ended when Yukio caught Viper with a cable that both choked her and send her hurtling up an elevated shaft where she received an apparently fatal head injury from the counterweight coming back down.[1]

Viper has medical experience in biochemistry with a particular expertise in toxicology and the blending of different poisons.

Like this? Let us know!
Retrieved from "https://marvel.fandom.com/wiki/Viper_(Doctor_Green)_(Earth-10005)?oldid=6484777"
Community content is available under CC-BY-SA unless otherwise noted.