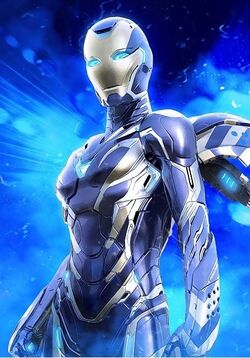 I think I understand why you don't want to give up the suits. What have I got to complain about now?

Virginia "Pepper" Potts was Head Administrative Aid to Tony Stark and a loyal assistant. She was often like a nanny telling Tony what to do, but always with some small amount of admiration that later bloomed into a more romantic interest.

Pepper was sent to hack into the company computer system when Stark became suspicious of his former mentor, Obadiah Stane. Once in, she discovered that Stane had been supplying terrorists with Stark weaponry and had hired the Ten Rings to kill Stark. She later met with Agent Coulson of "Strategic Homeland Intervention, Enforcement and Logistics Division", a counter-terrorism agency, to inform him of Stane’s activities.

When Stane attacked Tony on the roof of Stark Industries, Stark instructed Pepper to blow up the reactor core. Initially reluctant because she didn't want to hurt Tony, she soon complied, causing a massive blast that destroyed Stane’s battlesuit, and killing Stane himself. Stark also survived the blast, after being caught in its periphery, although it took some effort on Pepper's part to rouse him from his stunned state.[2]

Six months later, Potts was promoted to Stark Industries' CEO while Tony was getting his affairs in order. Unbeknownst to her, he had developed terminal complications from the poisonous side-effects of the arc reactor's palladium core. As a result, he began to spiral out of control and eventually his increasingly reckless behavior pulled them apart entirely.

Their reconciliation came on a night when Stark's arch-rival, Justin Hammer, unveiled his latest military marvel, a series of humanoid combat drones. When the drones activated and attacked Stark, apparently of their own accord, Pepper and Natasha Romanoff confronted Hammer and demanded they be shut down. When they found that Hammer had lost control of them, Romanoff departed to deal with them while Potts remained at the Expo. Stark swooped in and saved her when she strayed close to one of the damaged drones right before it was about to explode.

With Stark back, and free of the toxins in his bloodstream thanks to a new arc reactor design, Potts quit as CEO of Stark Industries. When talking to Nick Fury, Tony also hinted that he and Pepper were in a relationship and his life was back on track.[3]

Her relationship with Tony eventually graduated to a live-in arrangement when she began sharing living space with him in the newly built Stark Tower.[4]

After the Battle of New York, Tony found himself troubled by acute insomnia and doubting his ability to protect "the only thing he couldn't live without", Pepper, in a world of gods, aliens and other dimensions. He isolated himself in order to create more armor, forcing Pepper to become the head of Stark Industries once more. This strain resulted in him becoming increasingly distant from Pepper, as his efforts to ensure that he could protect her ironically drove him to spend less time with her.

One day Pepper was visited by an old acquaintance, Aldrich Killian, who asked her to join his organization A.I.M. and told her about a serum they had developed called Extremis, an offer she declined.

After Tony publicly threatened the terrorist Mandarin, Pepper tried to convince him to leave the city, but then scientist Maya Hansen arrived at their mansion to warn Tony about the Mandarin as well. Shortly thereafter, armed helicopters attacked the mansion with missiles. In order to protect Pepper, Tony commanded the Iron Man Armor MK XLII to form around her. Once Pepper and Maya were safe outside the collapsing structure, Tony summoned the suit once more, this time to himself, in order to defeat as many terrorists as he could. During the attack, he was left for dead.

Later that night, Pepper found the helmet of MK VII, and noticed it contained a message from Stark, telling her he was still alive, but couldn't return home until he found the Mandarin.

Pepper and Maya moved to a safe place as the latter apparently wanted to tell Stark something else more than to be in alert for Mandarin's attack. Hansen revealed to Pepper she had been working on the Extremis and that her boss, Killian, was selling it to the Mandarin. Killian found them, but it was revealed that Maya was still working for him and not against him, that they needed Tony Stark's intellect to stabilize the virus, and that Pepper could be used as an incentive.

Pepper was injected with Extremis, and taken to the Norco, a docked oil tanker where Killian intended to keep her as collateral and as a trophy. As her Extremis infusion progressed through its second bonding stage, he also ushered the Iron Patriot into the room, which then deposited the U.S. president onto the floor before them. Pepper was shocked when Killian explained how the president was to be executed, before he put Ellis back into the suit and sent him back out.

The execution was interrupted when Stark and Colonel Rhodes launched their rescue attempt. After several minutes of fighting explosions rocked the room where Pepper was imprisoned, sending her tumbling out onto a gantry, and almost to within reach of Stark. He tried grabbing her, but failed, and Pepper plummeted to the deck of the tanker.

Her Extremis virus saved her from the lethal fall however, regenerating the damage from the fall. When she came to, she found Killian advancing on Stark. She intervened with a surprise attack of her own, first bashing Killian away with a metal pole, then with a Stark explosive and repulsor ripped from a passing Iron Man armor. Detonated by the repulsor at point blank range, the explosive munition obliterated Aldrich Killian.

After being reunited, Tony and Pepper reconciled. Stark promised Pepper he could find a cure for the Extremis in her body, but also that he would no longer be obsessed with his job, as he ordered J.A.R.V.I.S. to activate the "Clean Slate" protocol, which caused every Iron Man armor to be destroyed in a firework-like explosion, in celebration of Christmas.[5]

Age of Ultron and Civil War

Pepper continued to act as CEO of Stark Industries, with Tony mentioning that she was dealing with various business deals prior to the Avengers' confrontation with Ultron.[6]

Despite Tony's best intentions, the reconstruction of his armor and his own issues about his role in Ultron's assault led to him and Pepper 'taking a break'.[7] The two eventually reconciled after the civil war between the Avengers, to the point that Tony felt comfortable adapting a conference intended to introduce Spider-Man as an Avenger into an impromptu proposal to Pepper.[8]

A couple years later, Pepper and Tony were even talking about the possibility of having a child together, but their conversation was interrupted when Doctor Strange appeared before them and requested Tony's aid. Not long after, a battle took place between Iron Man, Strange, and an invading alien force. Pepper was able to reach Tony to find out he was on the invaders' space ship, before their connection was severed as the space ship flew off into deep space.[1]

When Thanos snapped his fingers killing half of the universe's population, Pepper was among the remaining half of the Earth's population who weren't turned into dust. Days later, when Tony returned to the Earth after being saved from starving to death in space by Captain Marvel, Pepper stayed by his side while he recovered in hospital. Tony later married Pepper and had a daughter named Morgan Stark. Five years later, Both Pepper and a retired Tony receive a visit from Steve Rogers, Natasha Romanoff and Scott Lang, who went to ask Tony about using the Quantum Realm for a time travel heist to gather the Infinity Stones to bring back everyone killed by Thanos, but Tony dismissed it as impossible, even declaring Scott's recent return to be a fluke. But he later figured it out with his hologram interface, causing him to exclaim a curse word for his five-year-old daughter to learn. Upon being told by Tony about having a chance on reverting the damage caused by Thanos, Pepper agreed for him to join once more his friends in reclaiming the stones, telling him that the worst thing she ever did was to make him settle down from being a hero.

Later, during the final battle with Thanos, Pepper wearing her new Rescue Armor, appeared alongside many other heroes and the Wakandan Army to help Tony and the Avengers fight Thanos' Army, using various features of the armor to fight both on her own and in tandem with her husband. During the fight, Tony managed to claim all of the Infinity Stones, using them to turn Thanos and his entire army into dust, at the cost of his own life, dying while being conforted by Pepper, who told him that he could finally rest. Later, She and Morgan were one of the many people present at Tony's funeral.[9]

Expert Businesswoman: Pepper Potts has a great deal of business and management acumen.

Kickboxing: Pepper is trained in kickboxing.[10]

Pepper is allergic to strawberries.[3]

Like this? Let us know!
Retrieved from "https://marvel.fandom.com/wiki/Virginia_Potts_(Earth-199999)?oldid=6420053"
Community content is available under CC-BY-SA unless otherwise noted.