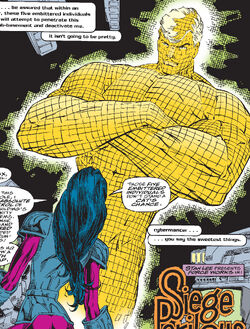 V.I.R.G.I.L. (Virtual Integrated Rapidly-evolving Grid-based Intelligent Lifeform), is an A.I. program was created by the Tony Stark of an alternate future. Vicious and cold-hearted, V.I.R.G.I.L. was sent against the Force Works team as part of a scheme by the villain Immortus.

This A.I. also had a holographic body. But unlike P.L.A.T.O., V.I.R.G.I.L.’s form was composed of hard-light, allowing him to physically attack the heroes in different ways, such as turning his hands into massive claws. This A.I. program was destroyed by the heroes and has never resurfaced.[citation needed]

Like this? Let us know!
Retrieved from "https://marvel.fandom.com/wiki/Virtual_Integrated_Rapidly-evolving_Grid-based_Intelligent_Lifeform_(Earth-9528)?oldid=6437805"
Community content is available under CC-BY-SA unless otherwise noted.