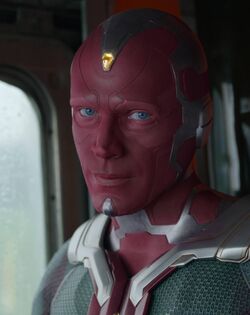 I have been a voice with no body. A body, but not human. And now... a memory made real. Who knows what I might be next?

Following the Funeral of Tony Stark, Wanda Maximoff went to the S.W.O.R.D. Headquarters which contained the remains of Vision bent on providing a proper burial. Upon arrival, she discovered that the technicians were disassembling her beloved's body. Devastated, Wanda left to visit a plot of land in Westview, New Jersey that Vision had picked out for the two of them to live in.[2]

Unable to contain her grief at the loss of so many people she had loved, Wanda unconsciously used her abilities to conjure "The Hex," a miniature alternate reality, around the small town as well as creating an entirely separate construct of Vision who, despite not retaining his old memories and being unable to exist outside of the "Westview Anomaly," shared the personality of the original Vision and his affection for Wanda,[2] being created from the aspect of the Mind Stone that persisted within her as well as her memories, grief, and love.[3]

Over the course of the following days, the new Vision, entirely oblivious to his artificial nature, played the part of Wanda's loving husband in their sitcom reality, though he soon started to notice some abnormalities within their seemingly idyllic life, including the peculiar behavior of their neighbors. When Wanda progressed rapidly through her pregnancy, Vision was among those who helped to deliver his twin sons, Tommy and Billy[4]. Vision's suspicions that something was amiss grew stronger when the family's next-door neighbor Agnes began to behave strangely around Wanda, such as instructing her to redo scenes as though in a television show. His sons also spontaneously aged to ten years old and Wanda began to haphazardly use her powers in front of Agnes, despite the couple's agreement to not reveal their enhanced abilities. Vision's suspicions came to a head, however, when he unearthed the true personality of one of his co-workers, "Norm," who revealed that everything was not as it seemed and that Wanda was in his and everyone else's heads, controlling them to act a certain way. Vision confronted Wanda with this information later on, but she tried to brush it off as being unrelated to her. Angry, scared, and confused, Vision aggressively demanded to know what was outside of Westview, confessing that he didn't know who he was and didn't possess any memories from before living in the small town. Wanda pleaded with him to calm down and trust her, though his trust was broken when a man claiming to be Wanda's deceased brother Pietro appeared at the door.[5]

Nonetheless, Vision continued to play along with Wanda's reality while also performing his own investigations on the side. After a discussion with a seemingly frozen Agnes, Vision encountered the barrier of the Hex and pushed through it, witnessing the setup of a large militarized S.W.O.R.D. encampment on the other side, but also starting to painfully disintegrate in the process. He warned anyone who would listen that the people within the anomaly needed help, catching sight of Darcy Lewis, who tried to help him.[6] He lost consciousness after this but woke up again amidst a circus that had been formed when Wanda expanded the barrier of the Hex to save Vision's life at Billy's warning, as he had telepathically felt Vision's pain. Here, Vision found an assimilated Darcy, now portraying an escape artist with the circus. He woke her from Wanda's control and convinced her to tell him the story of the original Vision, including his two deaths, determining once and for all that he was not, in fact, the real Vision. Finally realizing why Wanda was doing what she was doing, Vision set off to find her and make amends.[7].

He encountered his wife in the nick of time, just barely saving her from having her head crushed by the original Vision, who had been reassembled by S.W.O.R.D. Director Tyler Hayward as a coldly logical sentient weapon without any of his memories, personality, or morals, and was now a stark white color. The two Visions fought to a standstill, whereupon the White Vision informed the Hex Vision that his objective was to destroy the Vision. The Hex Vision reasoned with White Vision, through the identity metaphysics parable of the Ship of Theseus, that neither one of them was the real Vision because neither had his original body or his true experiences. The Hex Vision appealed to White Vision to allow him to restore these memories, which White Vision allowed him to do before flying away.

Vision rejoined his family, who had temporarily fought off a S.W.O.R.D. military force and Agnes, who had revealed herself to Wanda as the witch Agatha Harkness. Vision protected his sons as Wanda battled it out with the rival witch before finally beating her and absorbing her magic, in the process embracing her legacy as the Scarlet Witch. Realizing what had to happen next, Vision and his family returned home, where he and Wanda put the boys to bed and said good night. Wanda began to bring the Hex down gradually, releasing the Westview residents from her spells. Here, she said her goodbyes to Vision, explaining to him that he was all the best parts of her and her memories of him manifested as a living being. Vision responded that they had said goodbye before; it stood to reason that they would say hello again, too. With that, Vision, along with the rest of the Hex construct, ceased to exist.[3]

Vision retains all powers of his of his original counterpart, which include:

Being an aspect of Wanda's bond with the Mind Stone, Vision also has the ability to disrupt her control over the residents of Westview affected by her powers.[5][7]

Like this? Let us know!
Retrieved from "https://marvel.fandom.com/wiki/Vision_(Construct)_(Earth-199999)?oldid=6192489"
Community content is available under CC-BY-SA unless otherwise noted.