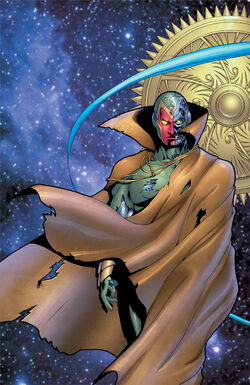 A sadistic and ruthless alternate version of the Vision who was part of Weapon X. He was almost killed once by Sentinels on David Richards' world, and died at the hands of Hyperion after he refused to refrain from carrying out their mission on Earth-94831.[1]

Seemingly those of the Vision of Earth-616.

Seemingly those of the Vision of Earth-616.

Like this? Let us know!
Retrieved from "https://marvel.fandom.com/wiki/Vision_(Earth-10101)?oldid=6484917"
Community content is available under CC-BY-SA unless otherwise noted.