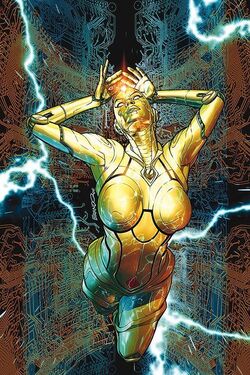 Members of the Ultimates and the X-Men discovered a damaged, sentient robot, who stated that the closest English translation to its name was "Vision".[1] The robot said it had come to Earth 100 years ago to warn them of a threat, but its ship malfunctioned, causing it to crash-land on Earth, in Tunguska, Siberia. Under the auspices of the former Soviet Union, the Vision was partially disassembled by government scientists; that, plus damage done in the crash, had kept the robot immobile. It warned that Gah Lak Tus, Eater of Worlds was headed for Earth.

Vision later came under United States government custody and was repaired[2], enabling the Vision to activate its own self-repair systems and restore itself fully, thus revealing its true form, which is (from a human perspective) decidedly female. The Vision proceeds to use its restored abilities to show holographic records of its travels, as it had warned planets of Gah Lak Tus' approach, only to see each planet fail in its defense and fall to the Eater of Worlds.

Vision had downloaded a complete record of Earth and is repairing its ship so it may move on to the next system in the path of Gah Lak Tus. The Vision was convinced by Jean Grey to help with a plan Jean has formulated to repel Gah Lak Tus, roughly a day before the Eater of Worlds is expected to reach Earth orbit.[3]

Gah Lak Tus was driven away from the Earth after it was overloaded with human thoughts and 20% of its mass was destroyed with the Reed Richards' "Nevada Gun," a cannon that fired the energy from an alternate universe's Big Bang.[4] Gah Lak Tus quickly left the solar system in search of weaker prey. The Ultimates decided to upload the Vision robot with the plans for the cannon and dispatch it to other worlds, enabling them to defend themselves should Gah Lak Tus threaten again.[4]

After leaving Earth, Vision encountered a "distress" signal from an A.I.M. space station. However, the signal was a ruse concocted by the station's commander George Tarleton. Tarleton tricked Vision into reactivating an intact Gah Lak Tus module left over from the devastation of the Ultimate Nullifier under the guise that they would order it to self-destruct. During her brief tour of the station, Vision befriended an artificially created girl named Dima.

After she helped in "deactivating" the module, the power of the module was transferred into Tarleton. In "repayment" for Vision's aid, Tarleton used his new-found power to fire an energy beam at her, breaking her in half and take control of the module, turning him into more of a cybernetic monster.[5]

Vision was later dumped into the station's disposal facility where an eccentric disposal worker decided to keep her intact. After Tarleton was eventually controlled by the Gah Lak Tus module and killed and infected all the A.I.M. crew members, Vision was able to self-repair and revive herself with the help of Dima. Vision was able to undo Tarleton's mental damage caused by his transformation and overcome the module's influence; the three, including Dima, escape the station after destroying it: Vision and Dima escaped the station by traveling on a shuttle waste dump while Tarleton clung to the pieces of the destroyed station as they re-enter Earth's atmosphere.

However, after Vision and Dima arrived on Earth, a fully repaired Gah Lak Tus module also lands in the United States. Vision teamed up with Tarleton and Falcon in destroying the module. During the battle, the group were barely finishing off the module, until Vision was horrified in seeing Tarleton using Dima as a last resort in their battle by letting her self-destruct in front of the Gah Lak Tus module, critically damaging it.

After the module was destroyed, Vision was infuriated with Tarleton's callous action and violently ripped his cybernetic head off his body and threw his severed head far over the horizon. Deeply saddened with the loss of Dima and being unable to leave Earth, the Vision was comforted by Falcon, who gave her his keys to his home if she needs to find a place to stay.[6]

Some years later, a portion of the Gah Lak Tus swarm arrived on the Bahamas.[7] Vision was informed of said event and travelled there with Falcon to investigate the site of the attack. Upon making contact with the rest of the Gah Lak Tus swarm, Vision discovered it had interfaced with an alternate version of itself, Galactus, who was travelling towards the Earth. Vision left to intercept him. The android tried to reason with Galactus, asking him to return to his own world, but failed and proceeded to attack him. Galactus was more powerful than expected, and annihilated Vision before continuing his path to Earth. With its remaining energy, Vision sent a message to Earth informing them that she had failed to defeat Galactus and that Reed Richards was going to be needed to stop him. She also told Falcon that she loved him.[8]

The Vision can alter her shape to conform with that of any planet's inhabitants, project holographic images several yards in diameter, and broadcast visual and mental messages on thousands of communication systems simultaneously.

She can perceive matter and energy on the molecular level and adjust her atomic structure to pass through any physical object or projected force. She can fly via the manipulation of energy obtained from hydrogen atoms in her vicinity.

Her body is equipped with microscopic nanites that can build complex technological devices from any raw material. Equipped with thousands of data storage units with information from hundreds of worlds, she can speak uncounted alien languages, some of which enable her to project neurotransmitters and hormones or various forms of energy such as gravitational disruptions, microwave bursts and molecular interference.

Like this? Let us know!
Retrieved from "https://marvel.fandom.com/wiki/Vision_(Gah_Lak_Tus)_(Earth-1610)?oldid=6438754"
Community content is available under CC-BY-SA unless otherwise noted.