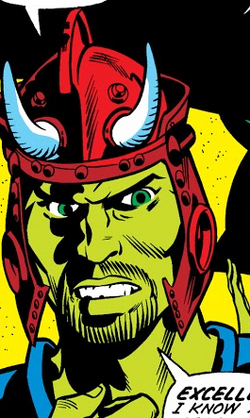 Visis was part of the royal family of the city of K'ai, on a world in the Microverse. However, while Jarella ruled as queen, Visis sought to usurp her leadership.
With the arrival of the Hulk in K'ai, Visis saw his hopes of becoming emperor fading, so he contracted the assassins of Pitll Pawob to kill both the Hulk and Jarella. The Hulk made short work of the assassins and then forced one of them to reveal who had sent them. Shortly thereafter, in the Great Hall of Assembly, the Hulk revealed Visis' traitorous actions, and he was arrested and sent into exile[1].

Like this? Let us know!
Retrieved from "https://marvel.fandom.com/wiki/Visis_(Earth-616)?oldid=4014196"
Community content is available under CC-BY-SA unless otherwise noted.