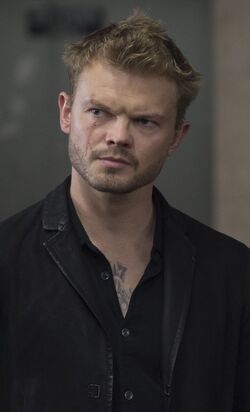 Eight years ago, Vladimir and his brother Anatoly were prisoners at the Utkin Prison in Siberia. They managed to escape, and set out to move to America. In the present, they were the leaders of "the Russians," a criminal organization located in Hell's Kitchen, specialized in operations involving human trafficking, and allied with Wilson Fisk.[1]

One of their cover ups, which helped with the distribution of Madame Gao's drugs, was a Taxi company called Veles taxi, which grew enormously when the owner of a rival company called Kitchen Cab, Mr. Prohaszka, was killed under the orders of Fisk, and their operations passed to Veles taxi. When a masked vigilante interfered in their activities, Fisk offered them to absorb their operations. At first they refused, and tried to deal with the vigilante by tracking down his ally Claire Temple. After Claire was rescued by the vigilante, and the Russians lost their only trail to get to him, Vladimir decided to accept Fisk's offer, for which he sent his brother Anatoly to seal the deal.

Due to having interrupted Fisk during a dinner, Anatoly was brutally murdered.[2] His corpse was later found by the Russians, with the mask of the masked vigilante. Fisk had incriminated the masked man for Anatoly's murder to keep Vladimir and the Russian mob off-balance until he could get rid of them. As Vladimir was preparing to hunt down the masked man, Fisk unleashed a series of explosion in the Russians' locations. As he was escaping from one of the attacks, Vladimir was beaten up by the vigilante. Corrupt officers working for Fisk arrived soon after.[3]

The vigilante managed to subdue the officers and escape with Vladimir. But during the fight, Vladimir was shot. Both managed to escape and hide in an abandoned warehouse. There, the vigilante used a flare to cauterize Vladimir's bullet wound to stop the bleeding, and revealed to him that he wasn't his brother's killer. The screams caused by Vladimir when the flare was applied to his wound alerted an officer nearby, who entered the building and requested for backup. With little time before the officers in Fisk's payroll raided the building, the vigilante tried to take information from Vladimir. Unwilling to die in that situation, Vladimir picked up a wooden plank and attacked the vigilante, the struggle caused them to fall through a couple of floors into the warehouse's basement. After initially refusing to cooperate, Vladimir helped the vigilante uncover a manhole and escape through the tunnels.

Vladimir started to collapse, and asked the vigilante to leave him behind, having acquired a gun from a squad of ESU who tried to take them down. Before the vigilante left, Vladimir told him the name of Fisk's accountant Leland Owlsley. When the vigilante was walking down the tunnels, he heard the gunshots from Vladimir's last stand.[4]

Like this? Let us know!
Retrieved from "https://marvel.fandom.com/wiki/Vladimir_Ranskahov_(Earth-199999)?oldid=6074724"
Community content is available under CC-BY-SA unless otherwise noted.