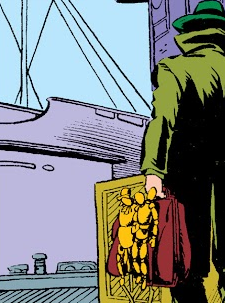 Vladivostok is a port on the Pacific Ocean in the far eastern part of Siberia, Russia.

A bearded traveller embarked from there on a steamer towards America, holding pictures of Pietro and Wanda Maximoff.[1]

Deadpool came here to negotiate the sale of a nuclear submarine, and later a small tug-boat, from Russian merchants.[2]

When Iceman learned of a group of Russian soldiers preventing mutants from joining Krakoa by militaristic means, the oddly-exiled Kate Pryde recruited him, Storm, and Pyro to allow them to leave, proclaiming her group to be the Marauders.[3]

Like this? Let us know!
Retrieved from "https://marvel.fandom.com/wiki/Vladivostok?oldid=6476758"
Community content is available under CC-BY-SA unless otherwise noted.