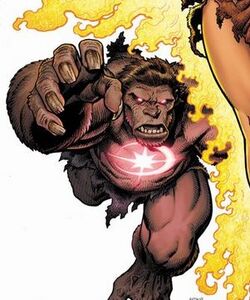 Vnn, the man who became Starbrand, lived on Earth about a million years ago. Banished by his tribe for being gay, he was drawn to the Garden, where - on the brink of death - he was saved by Brrkk. The two lived together in peace until the Deviant Empire attacked, seeking to enslave them and claim the Garden's power source for themselves. While Vnn and Brrkk were able to defend the Garden for a short while, the Deviants triggered a cave-in and the two fell into a chasm deep below the Garden. Brrkk was killed, but Vnn survived and found the corpse of a dinosaur that possessed the Star Brand. Vnn absorbed the power of the Star Brand and used it to defeat his assailants, razing the Garden to the ground in the process, though he felt unworthy of the power and believed Brrkk had been meant to claim it. A few months later, he joined the Stone Age Avengers.[1]

He and the other Stone Age Avengers fought an out-of-control Celestial called the Fallen. Starbrand got into a brief argument with Odin over who knocked down the Fallen, but they quickly quit their quarreling to focus on fighting the Celestial. The Avengers eventually defeated the Fallen and sealed it in an underground chamber in what would become the modern-day country of South Africa.[2] What became of Starbrand after that is unknown.

As a human, Vnn had been pacifistic, unwilling to kill even to feed himself while starving to death. Vnn possessed a degree of superhuman intelligence, continually impressing Brrkk - who shared this ability - with his ability to find intuitive uses for the bizarre plants growing in the Garden. Vnn loved Brrkk more than anything, and when Brrkk was killed Vnn was consumed with hatred and rage towards the entire world - venting it against those who threatened the world. Even after discovering there were others like him, Vnn only felt more alone and often spent his time brooding and mourning the loss of the one person he'd cared about.[1]

Seemingly those that a typical possessor of the Star Brand.[2]

Starbrand is unable to speak normally. He can only grunt. Only his teammate Iron Fist seems able to understand him,[2] though Phoenix is capable of reading his mind and possibly communicating telepathically. However, in flashbacks, he is shown communicating with his lover in complete sentences. It is unknown whether they communicated in a language other than that of his teammates, or if he lost the ability to speak upon gaining the Star Brand.[1]

Like this? Let us know!
Retrieved from "https://marvel.fandom.com/wiki/Vnn_(Earth-616)?oldid=6371853"
Community content is available under CC-BY-SA unless otherwise noted.