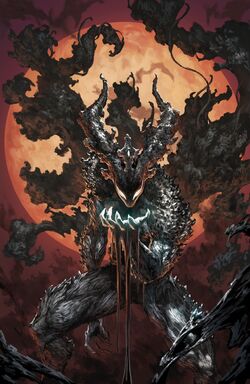 The Void Knight was a proto-symbiote spawned from the living abyss comprising the Symbiote Throneworld in order to enslave the time-displaced Silver Surfer and convert him into a soldier for the Symbiote Hive.

Before Knull could do much more than comment on Radd's legacy of planetary genocide, Ego the Living Planet interceded - firing a beam of psionic energy that immolated the Void Knight symbiote.[1]

Subservient to Knull, the Void Knight was dedicated to his mission to destroy all light and life in the cosmos.[1]

Those of the Silver Surfer, augmented by living abyss.

Like this? Let us know!
Retrieved from "https://marvel.fandom.com/wiki/Void_Knight_(Klyntar)_(Earth-616)?oldid=6490603"
Community content is available under CC-BY-SA unless otherwise noted.