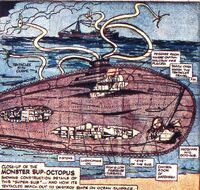 Von Grubb, a former Nazi, constructed the the massive submariner to take over Washington, D.C. and then the United States.

To this end, Von Grubb's vessel captured U.S. Destroyer #127, taking Captain Malcolm prisoner and demanding he reveal the path of sea-mines that were placed in defense of the region. When Malcolm refused, Von Grubb had his men kidnap the captain's wife and son to torture in the hopes that it would force Malcolm to talk. This proved to be Von Grubb's undoing, as the kidnapping was witnessed by the Sub-Mariner, who followed the kidnappers back to the sub. There he battled his way through the sub's defenses and crew to get to rescue Malcolm and his family.

Von Grubb would not be easily defeated; exiting his sub, he smashed through a window and pulled the Sub-Mariner out into the water, leaving the undersea monarch to fight off the vessel's various tentacles. The Sub-Mariner fought off these defenses, while Malcolm freed his captured crew, who overtook Von Grubb and his men. With the sub under the control of Captain Malcolm, it was taken into military custody for examination, and Von Grubb was turned over to the authorities.[1]

What became of Von Grubb's submarine is unrevealed.

The Monster Sub-Octopus had massive clawed tentacles that allowed it to grasp and sink ships and ran on a track that traveled around the circumference of the vehicle. Its engines were powered by high and lower power turbines that were assisted by oil-lubricated pistons. The ship had a room for prisoners, and it also contained a control room. The interior was accessible through an airlock at the front of the ship. It was fashioned to look like a massive sea creature.[1]

Retrieved from "https://marvel.fandom.com/wiki/Von_Grubb%27s_Monster_Sub-Octopus?oldid=5383494"
Community content is available under CC-BY-SA unless otherwise noted.