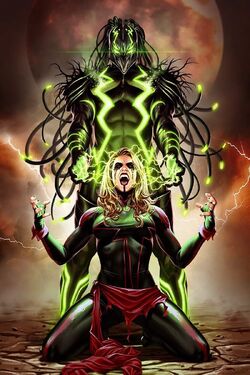 We -- a Vox who survived the odds to merge with the best and brightest fragments of the original Supreme Intelligence and create the greatest version of our own selves -- we will birth a master race. They will be the kings of the universe... and we their gods.

Vox Supreme was a Super-Inhuman who was merged with the best and brightest fragments of the original Supreme Intelligence of the Kree.[1] Following the Kree Imperium's massacre of the Inhumans, Vox Supreme made of the ruins of New Arctilan his base of operations,[2] and set out to birth a master race.[1] In order to fulfill his plan, Vox Supreme decided to harness the power of the Avengers.[1] To this end, they targeted nine different Kree refugee camps from all over the United States and planted a bomb within a child in every location. They then abducted the Avenger Captain Marvel and gave her twenty-four hours to kill and bring them her fellow Avengers, detonating one of the bombs to motivate her, and threatening the explosion of the others if she didn't deliver. Vox also outfited Captain Marvel with a special suit that allowed them to monitor her actions through sounds.[2]

Captain Marvel managed to outmaneuver Vox Supreme, and started progressively handing him over braindead cloned bodies of her teammates from an decomissioned S.H.I.E.L.D. project while safeguarding the real Avengers within Singularity, a sentient pocket universe outside Vox Supreme's reach.[2] Despite Vox Supreme's realization that Captain Marvel was planning something, they opted against taking action, assuming that whatever she was planning would fail. As Danvers was fighting and abducting her teammates, Tony Stark started preparing a plan against Vox Supreme's bombs.[3] As Carol delivered the final bodies to Vox Supreme, the Avengers put into action a plan to retrieve the bombs and defuse them.[4] When she returned to New Arctilan, Carol attempted to turn against Vox Supreme, but they restrained her to harness her power as well.[1] Using a device built by Stark, Captain Marvel managed to destroy the suit Vox had forced into her and fought the villain to keep him distracted. Their fight saw Carol doused with a green liquid from Vox Supreme's creation machine which had harnessed the essence of the dead clone bodies, mutating her into a monster with their combined powers. With the ability to wield Mjolnir due to the essence of the cloned Thor in her body, Captain Marvel managed to defeat Vox Supreme, and forced them into a device the villain had set up to restrain her. Afterward, Captain Marvel delivered Vox Supreme to The Raft for imprisonment.[4]

Vox's Suit: a suit made out of amorphous matter, resembles that of a typical Vox save for the green colour instead of red, and cables hanging out of his head and back.[1]

Like this? Let us know!
Retrieved from "https://marvel.fandom.com/wiki/Vox_Supreme_(Earth-616)?oldid=5854177"
Community content is available under CC-BY-SA unless otherwise noted.