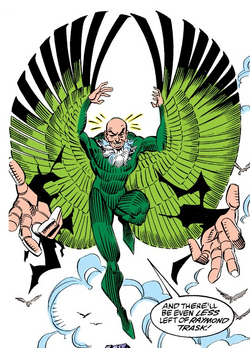 Or are you too dense to realize I'm hovering in a genius harness of my own design that allows individual self-guided, heavier-than-air flight?

The Vulture designed a pair of wings to fly without any noise. Using the Anti-Magnetic Inverter, Spider-Man was able to counteract the magnetic power that the Vulture harnessed for his wings, damaging them and causing the Vulture to spiral to Earth was arrested.[1]

In prison, the Vulture spent his time secretly smuggling parts from the prison machine shop into his cell, so that he could recreate his flying technology, this time correcting the flaw which caused his defeat last time: by switching the magnetic poles, the wings wouldn't be affected by the anti-magnetic inverter anymore.[2]

When he joined the Sinister Six, the Vulture used his wings to deliver a message to J. Jonah Jameson, telling him that Betty Brant had been captured and that Spider-Man had to go to Stark Electric Plant in order to save her. The Vulture was eventually defeated by Spidey and ended up in prison with the rest of the Sinister Six.[3]

Before Adrian Toomes seemingly died in jail, following an accident, he told his cellmate Blackie Drago the location of a spare set of Vulture wings. Once he learned of their location, Drago revealed that the "accident" was planned in the hopes that Toomes would reveal the location of the wings, so that once Drago got out of prison, he could use the technology for his own personal gain. That night, Drago managed to sneak out of the prison, and found Toomes' spare set of wings: hidden in a hiding place near the prison. Drago managed to escape before the guards could capture him, mastering how to use the wings in moments and flying away.[4]

He used the Vulture's wings against Spider-Man and Kraven the Hunter, but he was eventually defeated by Spidey at the Exhibition Hall.[5] Back in Toomes' possession when he was hired by the Kingpin to kill Raymond Trask, the wings were used to fly away after the failed assassination attempt, before the Vulture was lifted by Doctor Octopus in his Hover Jet.[6]

The Vulture flapped again his wings to deploy Sandman to Governors Island in order to steal a prototype amphibious tank, fending off Spider-Man.[7] The Vulture then joined the Sinister Six in the assault against the Cordco space launch facility, fighting Spider-Man again.[8]

As soon as he understood Doc Ock's real plan to infect the ozone layer with a drug that causes extreme convulsions in cocaine users, in order to rule the world alone in exchange for the burundite antidote for the rich and powerful addicts, the Vulture flew away, vowing revenge to the traitor.[9]

The original vulture wings resulted from Toomes' mastery of electromagnetic force, but he nevertheless managed to break out from Ryker's Island only with a pair of wings tinkered together from sheets and bed slats.[10]

The Vulture was then defeated by Daredevil in Brooklyn, and supposedly arrested by the police.[14] A while later, the Vulture was surprised by the Scarlet Spider, who tried to trap his wings with impact webbing, but the villain easily freed himself and flew away.[15]

After Spider-Man defeated the Sinister Six in a Nassau County top-secret facility where Doctor Octopus' Tentacles were stored, the Vulture managed to escape capture by flying away.[16] The Vulture then saved Hobgoblin when he was thrown off a rooftop by a collapsing water tower.[17]

As the de-aging effect was fading away, the Vulture used his wings to ambush his victims.[18] A short time later, he flew again to get revenge on the new Prowler.[19] The Vulture sneaked into Prowler's apartment, although he was out of his element, unable to maneuver in such a confined area.[20]

Like this? Let us know!
Retrieved from "https://marvel.fandom.com/wiki/Vulture%27s_Wings?oldid=6431447"
Community content is available under CC-BY-SA unless otherwise noted.