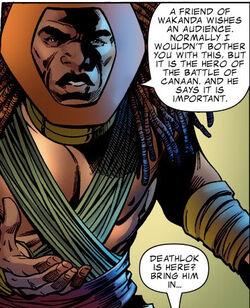 W'Kabi was the chief of Wakandan security as well as T'Challa's loyal second-in-command. He was killed by Morlun alongside Zuri, trying to protect the wounded T'Challa and the preparation of Shuri as the new Black Panther.[1] The two warriors were buried next to the other, W'Kabi's epitaph being: W'Kabi / Son of Wakanda / Protector of the Nation / Warrior and Friend.[2]

Like this? Let us know!
Retrieved from "https://marvel.fandom.com/wiki/W%27Kabi_(Earth-616)?oldid=5080391"
Community content is available under CC-BY-SA unless otherwise noted.