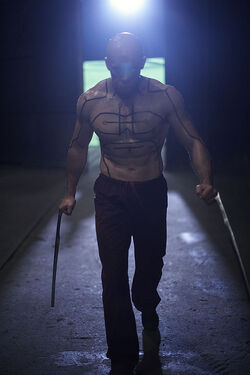 All I ever wanted was to travel to far off exotic places, meet new and exciting people, and then kill them; so I became a mercenary. My name is Wade Wilson. And I love what I do.

Wade Wilson was a soldier and mercenary with enhanced far beyond human reflexes and agility due to him being a mutant. During the Vietnam War, Wade was a member a Black Ops group called Team X under the command of William Stryker. The team also included James "Logan" Howlett, Victor Creed, Christopher Bradley, Agent Zero, John Wraith, and Fred Dukes. Stryker expressed that Wade would have been the "perfect soldier" if he could keep his mouth shut due to Wilson's fast chatter.

Later, Wade was captured and taken to Stryker's base at Three Mile Island where he was experimented on for the Weapon XI project. Stryker collected DNA from mutants whose powers could be used collectively within one body without destroying it. With Creed's help, Stryker gathered the DNA of several mutants, including Wraith, Bradley, Scott Summers, and Logan, with Wade being the host body. Stryker dubbed him as the "mutant killer" known as the "Deadpool".

After a battle against Logan and Creed atop a cooling tower at Stryker's plant, Weapon XI was beheaded and seemingly defeated by Logan. However, he survived decapitation. Like his Earth-616 counterpart who breaks the fourth wall, he shushed to the viewers that his survival must remain secret.[1]

Wilson's reflexes are enhanced to levels unobtainable by normal human beings. He has demonstrated this by dodging and reflecting bullets. He has even cut one in half with a katana.

It was also mentioned that his bonding process was "incomplete" due to Stryker ordered activation of Weapon XI before they managed to give more of abilities to him, as he needed to fight immediately.

Stryker also noted for Weapon XI project that his son was first piece of puzzle, while Logan is the last, assuming that Weapon XI has DNA (and some ability) from Stryker's son too, but which one, it is unknown yet, as he does not demonstrate any power that wasn't possessed by another mutant during the film.

Able to head-on with Wolverine

Could not focus on one or two opponents with combined powers of other mutants.

Like this? Let us know!
Retrieved from "https://marvel.fandom.com/wiki/Wade_Wilson_(Earth-10005)?oldid=6489332"
Community content is available under CC-BY-SA unless otherwise noted.