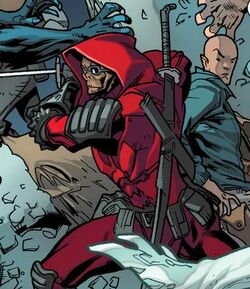 Stop! For God's sake, stop trying to kill each other! All this fighting, it's too much, even for me. I can't do this anymore. You wanna know how screwed up things are in the future? Open your eyes! It's so screwed up, they made me an X-Man! So screwed up we had no choice but to travel back through time and try to change history. You guys... you guys don't want our future. Believe me. Some of you... really don't want our future. It's not like the old days, when we were always laughing, remember? Or at least, I was always laughing. Nobody laughs in the future. Must be all the funerals. The future sucks. And if you guys are just gonna make us go back there, then... well... then I guess I quit. My healing factor ain't what it used to be. So I think this might actually kill me. God, I hope so. Bury me in chimichangas.

Deadpool is a member of the "Future X-Men" that came to the present to convince the Past X-Men to go back to their time.[1] He was presumed "dead" or near-dead due to injuries sustained in the Battle Of The Atom saga, but was later found to be alive and left to his original timeline with the now disbanded Brotherhood.

Seemingly those of Wade Wilson of Earth-616.

Seemingly those of Deadpool (Wade Wilson) of Earth-616.

Deadpool's healing factor isn't the same as it used to be.

Like this? Let us know!
Retrieved from "https://marvel.fandom.com/wiki/Wade_Wilson_(Earth-13729)?oldid=5851070"
Community content is available under CC-BY-SA unless otherwise noted.