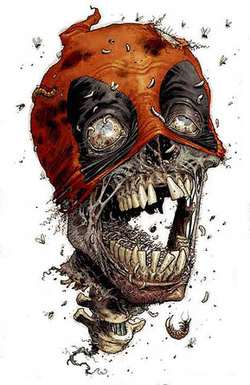 You were... an abomination. Best that you don't darken the doorway of progress... of the cause... of the end times. You were dead... but living, too. And that's not how it works. Dead is dead... for each and every one of us. Hrr If you weren't turned inside-out right now, you might've come to appreciate that.

Little is detailed about Deadpool’s life before the zombie plague arrived on Earth-2149, however it can be presumed that it followed much the same path as his Earth-616 counterpart.

At some point he was infected, and attacked the Silver Surfer. He most likely fleed the attack but also escaping the Power Cosmic zombies from getting himself incinerated and killed. [2]

He later transported from Earth-2149 to Earth-616, calling himself the "Merc with half a Mouth" (due to his lack of most of his jaw) and exhibiting a wide range of knowledge, which he used to take out Jennifer Kale's magic, and then attacked her. He appears to be killed when Wundarr the Aquarian threw him and Kale retaliated by luring Deadpool into the blades of a nearby skiff, completely tearing him apart. However, as the "Prime Carrier" he was contained within A.R.M.O.R..[3]

Deadpool, now reduced to only a head, managed to escape from A.R.M.O.R. Headquarters with the help of Simon Garth by using the base's teleporters to escape to the bottom of the sea, where Deadpool's head infected all of the Men-Fish. Garth was compelled to travel to the island nation of Taíno in the Caribbean Sea, where he told Black Talon about the zombie plague. Black Talon assumed control of Garth, and captured Deadpool's head. However, Deadpool soon escaped with the help of Garth after biting one of Black Talon's guard.

Eventually Garth sent Deadpool on a raft away from A.R.M.O.R. after faking his death,[4] and floated into a cave in the Savage Land where he was found by Headhunters and worshipped as a god, since the cave was sacred to them. Hydra was searching the area for toxins that could be used for weapons when they discovered his presence. Dr. Betty Swanson, a secret A.I.M. operative, and this universe's Deadpool were sent to retrieve him before Hydra could. Zombie Deadpool planned for the removal of this universe's Deadpool's head so that he could use the body. Deadpool-616 and Dr. Betty were able to extract Zombie Deadpool from the cave, but were captured by Hydra agents, leaving Zombie Deadpool in the bushes behind them. Eventually, Hydra discovered the Zombie Deadpool after interrogating Dr. Betty and torturing Deadpool, but was interrupted by a massive battle between the returning Headhunters and a Tyrannosaurus Rex lured by Ka-Zar. Zombie Deadpool was randomly possessed by each party during the chaos until being picked up by Deadpool-616. After escaping the carnage, Deadpool, his living counterpart, and Dr. Betty escape on one of Hydra's shuttle to A.I.M.'s satellite where the Zombie Deadpool was detained for examination. However, Deadpool-616 decided to save Zombie Deadpool after carefully learning that A.I.M. planned to weaponize traces of the zombie plague from the Zombie Deadpool. Once again escaping from Hydra when the station came under attack, the two Deadpools along with Dr. Betty and a reluctant A.I.M. agent named Bill, headed to Florida's swamps where the Zombie Deadpool first appeared on Earth-616, in the hope of returning him back to his home universe.

Once in Florida, the four avoided a territorial Man-Thing and fought, and killed Hydra's Lord Falcon. After finding a portal to the Multiverse, the Deadpools entered into it in the hopes of finding Earth-2149. Though, the two instead entered a few alternate universes where they meet their counterparts. The two unsuccessfully returned to Earth-616 where they have only been gone for a few seconds. Fortunately, Doctor Voodoo appeared before them and helped them bridging the portal to Earth-2149. This time successful, the Deadpools entered Earth-2149 and joined by Dr. Betty and Bill, who were frightened away by Man-Thing. The four were soon attacked by Earth-2149's Moon Knight, Tigra, and Shamrock, and eliminated them before escaping from more hordes of superhuman zombies. While hiding in a ruined church, the four are again attacked by the Zombie Mecho-Marauder and were saved by survivor Professor Veronica Chase and her colleagues of Empire State University. Deadpool and his allies were offered sanctuary beneath the city where they discovered that the survivors are close on researching a serum to the zombie virus. Some days later, Deadpool helped his counterpart in capturing a zombie Cypher for Veronica Chase as a specimen for her research.

When they finally decided to return to Earth-616, Veronica was zombified by Absorbing Man and the rest of her team eaten by him, so they both went behind them. When Absorbing Man was killed, they ambushed Veronica at the top of a building, thus she gave them a antidote to spare her. They got the antidote but pushed her anyway. However, Headpool was captured by Blake of A.I.M. though he bit him in order to get him back to his counterpart and his comrades so he could drink the antidote, though Deadpool gave him a fake one, thus he was zombified and pushed from the helicopter they were. When they got to the nexus, they meet with Zombie Wrecker, Zombie Piledriver, Zombie Doctor Voodoo and Deadpool, confirming that they have traveled to a early point of Earth-2149, even before the events of Headpool's arrival at Earth-616, though it didn't affected the continuity of both realities and later events at all.

After they were all killed, Deadpool placed his counterpart's head on the body of early zombie Deadpool that was killed with his head exploding, taking two shots at once. When he got his new/old body back, he felt hunger again, so he jumped into the opening portal, living the same events he went through at Earth-616, even becoming a severed head once again, thus he was unable to stop to revive them.[5] It stopped when Deadpool came and brought him to join the Deadpool Corps.[6][7]

After the events of Deadpool corps, he finally returned home. In the end, he was killed by an agent of the Evil Deadpool Corps who hunted down and killed alternate Deadpools as asked by an alternate version of him, one that questioned his whole existence and wanted to free the fictional characters by killing other Deadpools in the belief that they were the progenitors of all things.[8]

The Deadpool of this timeline, created when the Deadpools and their team came at this early point, followed the same path of his original timeline's self, until he meet with this version of Deadpool along with the mainstream one, Dr. Betty Swanson and Bill at the nexus to get to Earth-616, though he was killed and replaced by the elder version of himself. But since this version crossed the portal, the events of Marvel Zombies 3 and later still happened.[9]

Previously those of Wade Wilson of Earth-616.

Presumably those of Wade Wilson of Earth-616.

Previously that of Wade Wilson of Earth-616.

Presumably those of Wade Wilson of Earth-616.

Like this? Let us know!
Retrieved from "https://marvel.fandom.com/wiki/Wade_Wilson_(Earth-2149)?oldid=6118904"
Community content is available under CC-BY-SA unless otherwise noted.