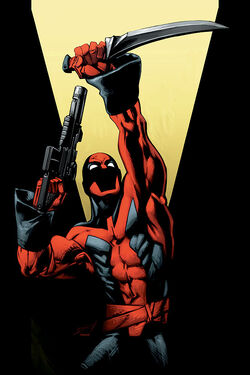 Wadey Wilson was a sergeant who after surviving death-defying action in the Wakanda Wars in the early nineties took the name Deadpool. Deadpool's true face had no skin and portions of his skull were missing, covered by a clear plastic helmet that made his face appear human-shaped when masked.[2]

Deadpool was a considerable anti-mutant human supremacist hired by the Genoshan government to hunt down mutants on live television as sport.[3]

Deadpool was one of the Reavers who assaulted the X-Men's X-Mansion during a visit from Spider-Man. He and his team used disguising technology to impersonate the X-Men and surprise them one by one with mutant-gene targeting stun guns. After capturing the X-Men, Deadpool also captured Spider-Man as a "bonus".[3]

While transporting Spider-Man and the X-Men to Krakoa, Deadpool showed some respect to Spider-Man's secret identity after stopping one of his men from unmasking him, possibly due to Deadpool's odd sense of "respect" to mask wearers.[4]

When Deadpool was unmasked it appeared that he was actually Professor X,[5] but this was quickly proved to be a holographic ruse, which Spider-Man could easily see through with his Spider-Sense. Eventually Spider-Man unmasked Deadpool's true facial identity, much to the shock and surprise of Spider-Man and the X-Men, while being broadcast live on television. This enraged Deadpool, causing him to fire his guns in a frenzy until Kitty Pryde phased through him, seemingly causing him to explode and apparently killing him. However, Deadpool miraculously survived his ordeal, as his battered figure appeared on Krakoa's shore as he watched the X-Men and Spider-Man leaving the island while clutching on to his recovered mask.[6]

Was later seen among the Evil Deadpool Corps, who were tasked with hunting down the regular Deadpool Corps. He was eventually killed by the mainstream Deadpool by getting stabbed through the chest with a sword.[7]

Has a greatly accelerated healing ability, though it doesn't completely heal/repair his heavily disfigured face. His healing factor does render him nearly-immortal, and beyond most forms of physical harm.

Deadpool possesses superhuman strength derived from his augmented skeleton and artificial musculature, allowing him to lift up to 2 tons.

He equipped himself with high-tech weaponry and enhancements, and uses a variety of guns including an electric stun gun, plasma energy gun, electrical energy guns, concussive force guns and various others. The cybernetic circuitry hardwired into his system includes an image distortion cloaking device that is hardwired into his system that uses organic light-emitting elements combined with a holographic generator allowing him to disguise his appearance. Cybernetic circuitry within his helmet enables him to control his disguise through mental commands.

Like this? Let us know!
Retrieved from "https://marvel.fandom.com/wiki/Wadey_Wilson_(Earth-1610)?oldid=6478496"
Community content is available under CC-BY-SA unless otherwise noted.