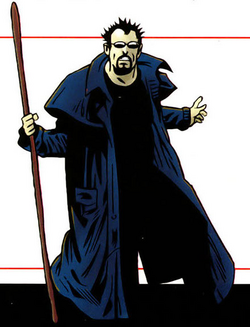 The enigmatic Death-God who called himself Walker hailed from a far distant Galaxy, where he was apparently the only deity venerated by all the sentient beings who lived there. It was unclear whether there were more Gods there before Walker grew to his stature, or if he was the only God at all. Nonetheless, due to the amount of worship he was shown, he became incredibly powerful.[2]

Eventually he came to know of the ultimate personification of Death, and sought to court her. She received Walker into her realm, and entertained his attentions for a time. Afterwards, he wished to give her a great gift...everything he had. The gift was every single life within his own Galaxy. He annihilated every creature, and absorbed the billions upon billions of souls into himself, intending to give them all to Death.[2]

However, the ever-fickle Mistress Death was repulsed by this callous disregard for life, and turned from Walker in disgust. Walker was shocked, and soon grew morose and angry. As his anger grew, Death sent him away... but the anger continued to build until Walker decided to destroy his would-be lover in a fit of cosmic vengeance.[2]

The Titan Thanos became fearful for Death's safety, and pleaded with her to seclude herself for the sake of the Universe. For should Death actually be destroyed, the balance of the Cosmos would be endangered. Heeding the advice of her ever-faithful follower, Death sought a host, and found one in the form of the recently murdered Marlo Chandler, girlfriend of Rick Jones. Using a device built by the nefarious Leader, Marlo was brought back to life, but Rick was unaware of the truth behind Marlo's resurrection and subsequent coma. In reality, Death had merged with Marlo, and due to the shock, protected her mind until it could fully recover. When it did so, Death brought Marlo out of the coma, and she went on to marry Rick, all the while unaware that Death itself lived within her.[3]

As Death hid herself within Marlo, Thanos sought the means to dispose of Walker. He went on to test Ka-Zar, to see how brave a normal human could be when faced with impossible odds. He feigned defeat there, and later recruited the bestial being known as Mangog in what seemed to be another gambit to destroy all life. However, in reality, this was yet another test. As he pitted Mangog against the thunder-God Thor, he observed both beings. Mangog especially intrigued him, since the enigmatic being drew its own power from billions of beings in a fashion similar to Walker's. Once again, Thanos feigned defeat and withdrew to formulate a concrete plan.[4]

Matters came to a head when Walker found himself drawn to Marlo Jones. Thanos enlisted the aid of Thor, and engaged Walker in combat. Jones used the Nega-Bands to summon Genis, the son of the original Captain Marvel, with whom he was bonded. The trio managed to repel Walker long enough for Thanos to transport them all to his ship, the Sanctuary. There, Thanos revealed the truth of Marlo's rebirth, and the severity of the threat they all faced. Using the powers of Thor and Captain Marvel, Thanos transported them all to the realm of purging (what many refer to as Purgatory), a realm where the dead work off their Karmic debt. However, Walker tracked them there and attacked, striking Marlo before being repulsed by Thor, Marvel, and Thanos. However, Marlo found herself unharmed by Walker's assault. Realizing even his vast power wasn't enough to destroy Death while in the realm of purging, Walker then attempted to talk her into destroying herself... he tricked Captain Marvel into attacking him, and then caused him to bang the Nega-Bands together, causing Genis to switch places with Rick Jones. Walker then tortured Jones, destroying the Earthman's left arm with his staff. Walker goaded Death further, and was soon attacked by a group of Viking Warriors who had been the earthly companions of Thor. Because they had died of plague instead of perishing in battle, they had not entered Valhalla, and instead dwelt in the realm of purging. Walker, however, repelled them easily, angering Thor, who again attacked Walker alongside Thanos. Walker overcame them, and continued to torture Rick Jones, warping time around him and aging him many years as a result.[3]

It was then that the true aim of Thanos' plan went into motion. As Thanos well knew, Death was not only a taker of life, but also the assuager of pain...a being who despised suffering. Death, enraged by Walker's cruelty, emerged from Marlo and attacked Walker directly, using her power to free the billions of souls Walker had drained. The souls erupted from him violently, promising to cause the former Death-God an eternity of torment. That done, Death separated itself from Marlo, who instantly collapsed. However, in gratitude, Death restored Marlo's life, and promptly returned to her realm.[5]

As a Death-God, Walker possesses virtual immortality and invulnerability; the ability to manipulate vast cosmic/mystical energies for numerous purposes including powerful force-bolts, creating near-impenetrable force fields, the ability to manipulate small pockets of space-time, and the creation of interdimensional apertures to transport himself across dimensions. Walker has augmented his already vast power by absorbing the soul of every being within his home Galaxy. These trillions of souls increase his abilities to an unknown degree, making him possibly the most powerful Death-God within this universe.[3]

Walker apparently possesses knowledge of hand-to-hand combat, and is a formidable fighter.

Staff: Walker carries what appears to be a roughly-hewn wooden staff, but in reality it is a nearly indestructible weapon which he uses as a focus for his incredible energies.

Starship: Walker possesses an imposing starship which is several miles in length and bristles with powerful weaponry. This mammoth craft appears as an enormous Skull and skeletal torso

Like this? Let us know!
Retrieved from "https://marvel.fandom.com/wiki/Walker_(Deity)_(Earth-616)?oldid=5733125"
Community content is available under CC-BY-SA unless otherwise noted.