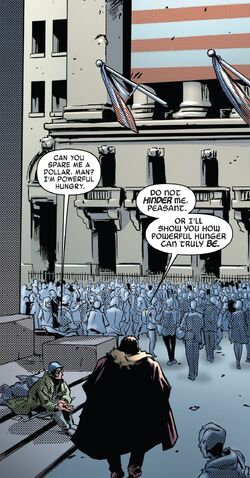 Wall Street is a street in Manhattan, New York City, New York, United States. It runs east from Broadway to South Street on the East River, through the historical center of the Financial District. It is the first permanent home of the New York Stock Exchange; over time Wall Street became the name of the surrounding geographic neighborhood.


In a towering office building, the Owl met his accountant George Grey, whom he framed so that he would have taken the blame for his illegal business dealings and tax frauds. Scant minutes later, Mr. Grey was found dead by Daredevil, as he walked right in front of a speeding car. The Owl was the questioned by the police and suggested to get himself a lawyer.[1]

The Missing Link was released in the Wall Street area by the Communists, where it freed itself and began wandering the city, trying to make sense of its situation.[2]

Like this? Let us know!
Retrieved from "https://marvel.fandom.com/wiki/Wall_Street?oldid=5227344"
Community content is available under CC-BY-SA unless otherwise noted.