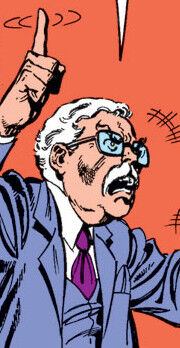 Walter Collins acquired the Baxter Building when Reed Richards became financially insolvent and was forced to sell the building.[1][2] Collins became the landlord of the complex and was constantly at odds with its most famous tenants, the Fantastic Four. Collins acquired these tenants shortly after the team first formed, assuming that their fame would add an air of prestige to the building.[3] However, Collins soon came to regret this decision after years of constant damage and disturbances caused by the Fantastic Four over the years. Collins lived in constant fear that the Fantastic Four's adventures and the subsequent attacks on the building were a threat to the safety of his other tenants and, perhaps more importantly, lowered the value of his property.

When public opinion about the Fantastic Four soured following a rampage caused by the Thing, Collins finally used this as an opportunity to attempt to evict the famous family. His attempt at doing so ended with Mr. Fantastic shooing him out of their headquarters[4]. This set the tone for Walter's interactions with the Fantastic Four over their future encounters.

When battling the Over-Mind, Collins used their absence to try and evict them by putting a padlock on their door, but the Thing broke through it upon their return.[5] When the Human Torch and the Thing returned to the Baxter Building during the same mission, Collins attempted to have the Torch arrested, and the Thing hung him from a flagpole.[6]

When an elevator in the building collapsed, Collins blamed the Fantastic Four and was shooed out of their headquarters by Reed Richards again.[7] When angrily slamming his fists against the wall, the Thing caused a building-wide tremor prompting Collins to go up and threaten to evict the FF again, to which the Thing reacted by hanging Collins on a coat rack.[8] Later when Collins arrived with a court order to have the FF evicted, the Human Torch lit it on fire before departing.[9]

When the Frightful Four temporarily took over the FF's headquarters and opened auditions for a new fourth member, Collins was infuriated by all the applicants who showed up. However, since none of them were currently wanted or doing anything illegal there was nothing to do. When the Brute transformed in front of Collins he fainted at the sight.[10]

During a period when the Fantastic Four temporarily broke up, Collins attempted to rent the property, and when complaining to the Thing about the mess made to the property, he was dumped into a flower pot.[11] The FF got back together, and with nobody wanting to rent out their former headquarters, Collins was forced to allow them to move back in at a lower rent much to his chagrin.[12]

Walter returned from a long vacation to see that extensive damage was done to the building in his absence. Furious over having to deal with this after getting back from his trip, Collins once more threatened to evict the Fantastic Four. Finally growing weary of Collins' constant complaints, a more financially solvent Reed invoked a buy-out clause in his lease and wrote a check to purchase the building off Collins on the spot. Collins was last seen walking away with the check with a big grin on his face.[2]

Like this? Let us know!
Retrieved from "https://marvel.fandom.com/wiki/Walter_Collins_(Earth-616)?oldid=6129830"
Community content is available under CC-BY-SA unless otherwise noted.