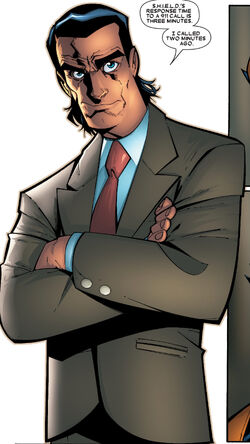 Walter Declun was the CEO of Damage Control, Inc. Declun and his investors took a controlling share of the stock after the company went public to obtain more funds. Following the Stamford disaster, Damage Control obtained the town's reconstruction contract, as well as a contract to perform the evaluation and training of registered super-humans.

The super-villain Nitro reveals that Walter Declun was in some way behind the explosion that led to the deaths of 600 people in Stamford, Connecticut, having provided Nitro with MGH (Mutant Growth Hormone) in order to enhance his powers. Wolverine's investigation led him to interrogate Anne Marie Hoag, Damage Control's President.

In his search for Declun, Wolverine engaged in a fight with Damage Control guards, who were equipped with Mandroid Armor, S.H.I.E.L.D. weaponry, Stark Enterprises technology and other weapons and equipment salvaged from superhuman fights. Wolverine defeated them with the aid of two members of the Atlantean Royal Guard.

Having survived his confrontation with the Damage Control forces and then escaped from S.H.I.E.L.D. imprisonment, Wolverine confronted Declun, who had just been fired by Hoag, and apparently killed him. However, it later transpired that Wolverine had "only" stabbed Declun's eyes out, which he later had replaced with cybernetic implants.[1]

When Spider-Man was temporarily blinded in a fight with Blindside, one of Jackpot's rogue's gallery, his investigations led him to connect the Oedipus neurotoxin used by Blindside to a product he developed for, and apparently stole from, Declun International.

Later, Declun was employed by Doom to manage his global network.

Like this? Let us know!
Retrieved from "https://marvel.fandom.com/wiki/Walter_Declun_(Earth-616)?oldid=5491203"
Community content is available under CC-BY-SA unless otherwise noted.