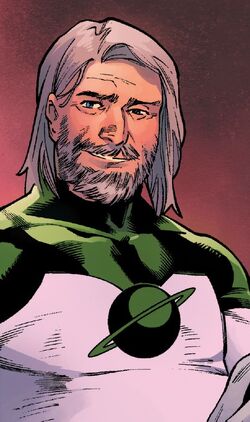 Dr. Walter Lawson was a scientist who was hired by General William Bridges to work on the missile base at Cape Canaveral. On his way to the base, he was seemingly killed when his plane was shot down by a laser beam fired from the Kree Starship Helion when Colonel Yon-Rogg had actually aimed at Captain Mar-Vell. Mar-Vell took on the identity of Walter Lawson to infiltrate the base.[3][4]

Unbeknownst to the military and Mar-Vell, Lawson had also been working for the criminal conglomerate the Organization, and had created the killer robot Cyberex for them.[5] He also designed the Eon Ray for them.[6]

Calling himself Wastrel, Dr. Lawson later turned up alive, stealing Kree technology in the greater New York area.[2] When he confronted Captain Marvel and Ms Marvel, he revealed to them his plan to take revenge on the Kree, since he thought that the Kree tried to deliberately kill him and purposely stole his life. He also revealed that he had been spying on them due to their connection to the Kree, and then used his Kree technology to attack them and escape. After that, he rebuilt the Helion and allowed Captain Marvel and Ms. Marvel to track him down. At this point, he had sent a distress signal to the Kree so they could send an aid squad for Wastrel to attack and steal their ship. However, the Kree instead sent the Starforce division team Starforce Blue to deal with him.[1]

Upon the arrival of Starforce Blue, he admitted to them that purposely stole their technology to get revenge on them. A fight soon broke out, with most of the Starforce Blue members trying to kill Wastrel, while the heroines tried to stop them. Amidst the fight, Wastrel revealed that he had rebuilt the Psyche-Magnitron into the Psyche-Magnitron 2.0 which instead of giving powers like the original one, would take away the powers. He planned to use it on the Kree and turn them weak, unable to survive, and also thought of using it on Carol and Kamala. Carol distracted Wastrel long enough for the Starforce to cloak Kamala, allowing her to destroy the Psyche-Magnitron. Afterwards, the Starforce sentenced Walter with ten years of community service in the Kree Empire, much to his pleasure.[7]

Wastrel managed to escape the Kree prison on the second day and began plotting his plan against the Kree. When the Alliance constructed the city of K'in-Al on the planet Mar-Da'en to be a sanctuary city for the Kree and the Skrulls, Wastrel detonated the entire city, leaving Lauri-Ell to be blamed.[8] Following the city's destruction, Walter presented himself as part of the clean-up crew when Captain Marvel, having become part of the Accuser Corps for the Alliance, arrived to investingate not to draw any suspicion of her.[9] Carol eventually caught notice of Lawson's bluff and returned to Mar-Da'en accompanied by Spider-Woman, War Machine, and Hazmat. Wastrel unleashed his Kree robots on them, but the heroes managed to destroy his inventions and apprehended Wastrel.[8] Lawson was subsequently handed over by the Kree to answer for his crimes.[10]

Like this? Let us know!
Retrieved from "https://marvel.fandom.com/wiki/Walter_Lawson_(Earth-616)?oldid=6007333"
Community content is available under CC-BY-SA unless otherwise noted.