9
WandaVision is a Disney+ original limited series produced by Marvel Studios, that is set in the Marvel Cinematic Universe.

It feaured Elizabeth Olsen and Paul Bettany reprising their roles from the films, as Wanda Maximoff and Vision, respectively. It also introduced Teyonah Parris portraying the character Monica Rambeau as an adult, after the character had previously appeared in the film Captain Marvel as a child.[1] 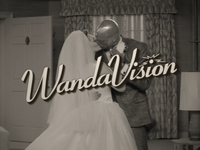 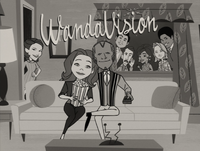 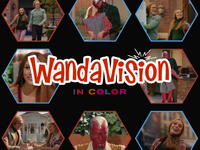 The series was originally slated to follow after the release of The Falcon and The Winter Soldier on Disney+. However, production delays due to the COVID-19 pandemic held back the latter's release, making WandaVision Marvel Studios' premier series on Disney+.[2]

On November 12th 2020, it was announced that the series would debut on January 15, 2021.[3] The series premiered on that date with its first two episodes, which made it the Marvel Studios property that officially began Phase Four of the Marvel Cinematic Universe.

After the series finale aired in March 2021, series director Matt Shakman revealed that Marvel Studios initially planned on having the first three episodes premiere simultaneously on Disney+ but the third episode was delayed to the following week due to COVID-19 pandemic affecting production on the finale. Delaying the episode allowed the crew an extra week to work on the finale, which was only finished two weeks prior to when it aired.[4]

Like this? Let us know!
Español Italiano Português do Brasil Русский
Community content is available under CC-BY-SA unless otherwise noted.
Advertisement