"Filmed Before a Live Studio Audience" 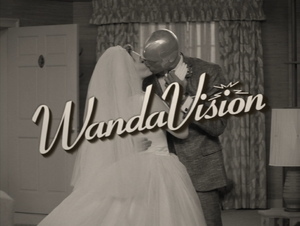 Appearing in "Filmed Before a Live Studio Audience"

Synopsis for "Filmed Before a Live Studio Audience"

Recently married, Wanda Maximoff and the Vision move into a quiet town named Westview. On August 23rd, Wanda prepares a romantic dinner for their anniversary. However, Vision believes that the special occasion is them hosting his boss Arthur Hart and his wife for dinner. The couple resort to using their powers in order to create an entertaining evening and to leave a good impression on Vision's boss.

The evening takes a turn when Vision's boss starts asking too many questions about the couple's past. He nearly chokes to death, but Vision uses his powers to save him. In the end, the boss leaves with a good impression of Vision, Wanda and Vision come to terms with their unusual nature as a couple, and Wanda creates marriage rings for the both of them.

Unknown to them, their activity is broadcast as a WandaVision sitcom, being monitored by someone at a S.W.O.R.D. base.

Like this? Let us know!
Retrieved from "https://marvel.fandom.com/wiki/WandaVision_Season_1_1?oldid=6499460"
Community content is available under CC-BY-SA unless otherwise noted.